Freshwater eel populations around the world are in steep decline.

In New Zealand, although longfins are still one of the most common freshwater fish, there are concerns about the scarcity of very large specimens. There are also indications that elver recruitment into New Zealand waters, especially amongst longfins, is declining. Several factors could be contributing to the observed decreases, including changes in oceanic currents, habitat losses, over-exploitation of adult stocks, and the mortality and migration delays experienced by upstream and downstream migrants at instream barriers.

Over the last decade in New Zealand, tuna -  especially longfins - have turned from being considered a pest that preyed on newly established exotic trout, into a species that is in "gradual decline". In the 1950s there were eel extermination programmes in place, and when Karāpiro Dam on the Waikato River was built in the 1940s an electric barrier was installed on the spillway at the request of the then Marine Department, specifically to stop elvers from accessing the habitat upstream and to "clean out the existing stock of eels in the proposed dam and its tributaries".

Similarly, the fish pass on the Arnold Dam was not reinstated when the weir was raised in 1932, as the pass would have facilitated the passage of eels. When Roxburgh Dam was built in the 1950s, fisheries managers agreed that no fish pass was necessary. The reason for the decision was apparently to "protect upper lake fisheries from contamination by eels or salmon". Although such antagonistic attitudes towards tuna still persist, more upstream trap and transfer programmes and elver passes are being implemented each year.

In New Zealand, fisheries regulations including the Quota Management System (QMS) and a ban on commercial harvest in some rivers and lakes have recently been put in place in anticipation of controlling harvest. However, wetlands are still being drained, new flood banks, flood gates and pumping stations continue to be installed, and waterway channelisation and bankside vegetation removal is ongoing, all with little concern for the resulting loss of eel habitat. Since European settlement there have been many changes in land use in New Zealand, with large forested areas having been cleared for human habitation and agriculture. Tuna - willow as habitat for tuna

From about the 1840s, willows (Salix spp.) were introduced to New Zealand by early settlers. One of the greatest threats to indigenous fish species which follow a catadromous life cycle (i.e., starting life at sea but then migrating into freshwater) are barriers that prevent or delay migrations between freshwater and marine environments. 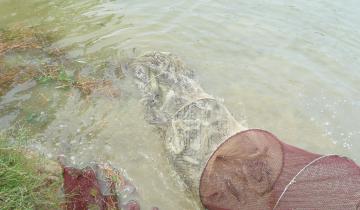 There is no argument regarding the importance of tuna in the lives of Māori: this taonga species permeates, for example, place names, whakataukī, legends, waiata and artwork. In export terms, the commercial eel fishery in New Zealand began in earnest in the 1960s and expanded rapidly until the early 1970s, peaking at slightly over 2,000 t (tonnes) in 1972. The majority of New Zealanders are able to recall a story about catching eels when they were children, to eat from the camp fire or enter into the local pig hunting competition. On a global scale, market demand for eels as a foodstuff is high and declines in wild eel production mean that aquaculture is being put forward as a potential provider. The Wairere Falls Power Station on the Mōkau River. Without intervention instream barriers like hydro dams can prevent the safe passage of eels during their upstream and downstream migration. Credit: Jacques Boubée Trends in recruitment of the European eel (A. anguilla), Japanese eel (A. japonica) and American eel (A. rostrata). Credit: Dekker (2004)