Estuaries are the meeting place of land and sea - they integrate and accumulate the effects of activities on the land.

Environmental changes that occur in estuaries due to land-based activities include:

Many of these environmental changes may occur gradually – over years or even decades – and might not be recognised at an early stage. They can have significant impacts on Māori, who value estuaries for a number of reasons: as spiritual places, including their healing/meditative properties; as a source of identity and cultural history; as a context for learning and customs; for recreation and as a food basket. Estuaries provide kaimoana as nourishment not just for the local community but also for neighbouring inland communities.

Traditionally, tangata whenua have informally accumulated information about environmental change in their estuaries to monitor resources, such as kaimoana, and to make decisions about conservation measures, such as rāhui. However, when it comes to decisionmaking within the framework of environmental legislation (such as the Resource Management Act), science-based tools are often needed to complement the traditional knowledge and kaitiakitanga responsibilities that tanagata whenua have practised for centuries.

Ngā Waihotanga Iho (translation: what is left behind, lift up), the estuary monitoring toolkit for Iwi, has been developed to provide tanagata whenua with tools to measure environmental changes in their estuaries. While Ngā Waihotanga Iho is based on sound science principles, it is also underpinned by tangata whenua values.

The toolkit is comprised of a series of modules:

Note: there are 11 modules in total - the above are modules 3 to 10 and contain tools. Module 1: About this Toolkit and Module 2: Estuary Origins contain intro/background information. Module 11 is the Appendices.

A unique feature of the toolkit is that the manual will be available in both Te Reo and English.>

The project has unfolded in three phases:

The modules are designed so that hapū and community groups can pick and choose which are of greatest use for their particular estuary. They are also intended to provide an educational resource for secondary school students.

Ngā Waihotanga Iho is in its final stages of review following a series of field trials in Kawhia during March 2011. The final version of the toolkit is expected to be ready for release in March 2013.

The NIWA Systems Development Team are also working on a prototype web-based data management system which will complement Ngā Waihotanga Iho and allow registered users to enter and store data collected using the various modules within the toolkit. Future upgrades of this prototype will also allow users to analyse and export data in user friendly formats. The initial prototype is expected to be ready for testing in April 2013.

Please watch this space for regular updates on the progress of these tools. A diagram of an estuarine and coastal system, showing some of the fish species and habitats that occur. Note that these vary depending on where you are in New Zealand. [NIWA] 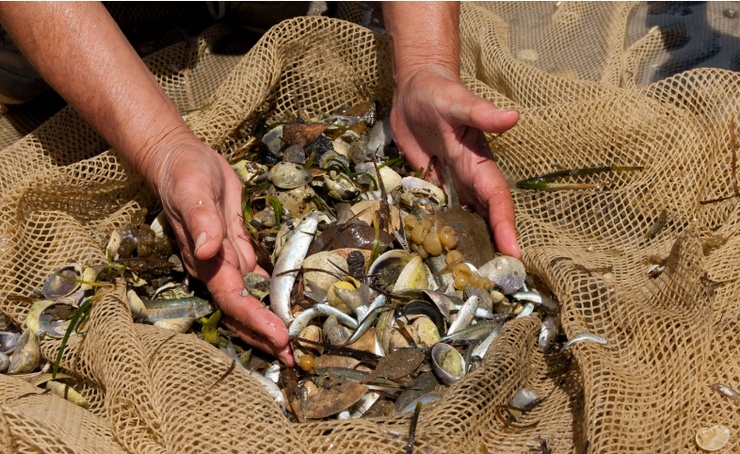 Sampling fish in an estuary. [NIWA]