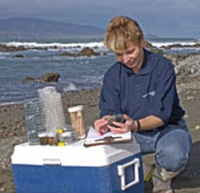 Japan, Bermuda, Germany, USA: Dr Els Maas knows that wherever she goes she’ll find the microbes that are her passion. She began her travels at the age of 12, when her family emigrated from the Netherlands to New Zealand, settling first in Hamilton and finally in Napier. Today her work as an environmental microbiologist keeps her moving, with regular trips to the Cook Islands to test water quality and to Tasmania to test probiotic bacteria for aquaculture. When she’s not on the trot, Els works at NIWA’s Wellington site, where her research involves developing useful products from marine bacteria.

W&A – What are probiotic bacteria?

Els – In aquaculture, they are bacteria that are added to a food or the water to help prevent sickness in fish. It’s a bit like adding Lactobacillus acidophilus and Bifidobacterium to yoghurt to make it better for you. A few years ago we discovered some bacteria that are able to kill the Vibrio bacteria that cause infections in fish and other marine animals.

W&A – When did you decide to become a scientist?

Els – When I was in Form 2, I did work experience at Ruakura Research Station in Hamilton and saw the cows there with the windows in their sides. I was fascinated by what the researchers might see and could find out about the cows’ digestion. So after completing 7th Form, having taken all sciences plus languages (another one of my interests), I went to University of Otago to do a basic science degree, with no idea what to specialise in. At the end of my second year I was offered both microbiology and biochemistry honours and had to choose which one to do. I basically had no idea and in the end decided on a whim to do microbiology. I may have been influenced in that direction by a great woman scientist then working at Otago – Professor Margaret Louttit – who was something of a role model for me. I am sure that she has inspired many women to go into microbiology.

Els – Not right away. After finishing my honours degree, I got a job as a research assistant at what was then the New Zealand Communicable Disease Centre, now ESR Ltd, in Wellington, working on the bacteria that cause scarlet fever and rheumatic fever. Then I travelled to Europe and put my languages to work, living and working in both the Netherlands and France, where I worked on a campsite and spend quite a bit of time on the beach.

A great opportunity came up to work on the toxic algal blooms that occurred in the early ’90s and I returned to New Zealand and Otago University to do my PhD. My thesis looked at the involvement of marine bacteria in toxin production. I completed my PhD in less than three years, including a lot of time in Germany at the Centre for Biotechnology and at Woods Hole Oceanographic Institute in the US.

Once I had my doctorate, I wanted to work in marine microbiology, but at the time there were few jobs in the area, so instead I returned to ESR and managed two internationally recognised reference laboratories: one for Legionnaires’ disease and one for leptospirosis. I also worked with some of the forensic scientists and we developed a method for typing soil that could be used to link a criminal to a crime scene. This method has been patented and ESR is developing it further.

Then an opportunity arose at NIWA and I jumped at the chance to come here and work with marine microbes again.

W&A – Your career has taken you to a variety of locales. What’s your favourite and why? 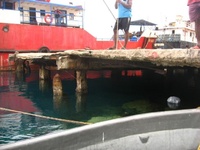 Els – It’s hard to pick a favourite because they are all quite different, but for lifestyle I would have to say the Cook Islands, although I recently visited Mallorca, Spain, and found that quite appealing: sea, sun, and sand plus a great lifestyle. Speaking five languages has made it easier to move around and has also made it easier to work with researchers who don’t speak English.

W&A – What is it that intrigues you most about marine bacteria?

Els – They are interesting because the ocean is so vast and so different in many places, yet bacteria have been found everywhere. They are involved in the major processes in the oceans, such as the cycling and recycling of nutrients. In New Zealand, marine bacteria are still poorly understood and under-studied; this makes it interesting for me. We regularly find new bacteria that people have not seen anywhere else in the world.

Recently we isolated two new genera from deep-sea sediments, down to 3000 m. It was unexpected for us, first of all, that we could grow these bacteria and, secondly, that no-one had grown or seen them before. Being able to make discoveries like that makes work enjoyable. It also shows that here in New Zealand we really know very little about what marine bacteria are in our oceans and what they do. Once we know some of this, we should be able to put these bacteria to use.

Read more about Els’ search for marine bioactives in ‘Tapping into the power of marine bacteria’. Contact Els at [email protected].