Tagging along when longfins go spawning 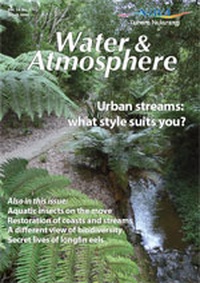 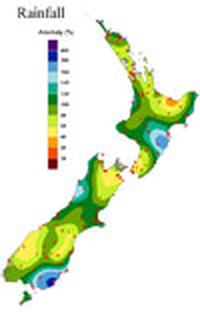 A tagged eel heads for the sea to begin her journey to the spawning grounds. (Photo: Don Jellyman) 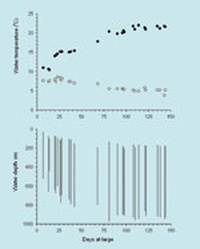 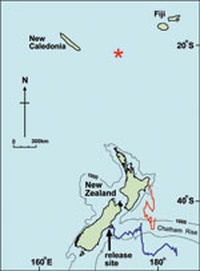 Tracks of two of the eels released in May 2000 at Te Waihora, just south of Banks Peninsula.

Don Jellyman explains how high-tech tags are helping to reveal the secret biology of eels at sea.

All 15 species of freshwater eel spawn at sea, although we know with certainty the spawning grounds of only four species. Unfortunately, these four do not include the two common New Zealand species: the shortfin (Anguilla australis) and the longfin (Anguilla dieffenbachii). Until the last few years, our only practical means of determining where freshwater eels spawn has been by towing fine-mesh nets at depths ranging from 50 to 300 m, trying to catch progressively smaller larvae (leptocephali) – a practice that is both time-consuming and costly. Although a recent NIWA research voyage caught 164 eel larvae this way, none of these was a freshwater species (see Water & Atmosphere 13(1): 6). Thirteen shortfin eel larvae have been caught during previous marine voyages, but the longfin eel remains the only eel species for which no larvae are known.

An alternative technique is to track the adults on their way to the spawning grounds, using high-tech tags. Scientists from NIWA and the University of Tokyo have cooperated in a programme using new 'pop-up' tags that record and store environmental information along the eel’s journey. The tags are programmed to release (pop up) from the fish at predetermined times, ascend to the surface, and beam the stored information to a satellite. Tags record water temperature, day length, and times of sunrise and sunset; these latter data can be used to estimate latitude and longitude of the eel each day, and hence obtain tracks of the swimming directions of the fish. As the tags are comparatively large (75 g, 175 mm long), we attach them only to large longfin females (8–11 kg). The eels we used in our study were caught by commercial fishers in Te Waihora (Lake Ellesmere).

We tagged and released four eels in May 2000. Two of the tags were programmed to ascend after two months, followed by the other two a month later. The data they transmitted to the satellite included sufficient daily location data to construct swimming tracks for all four eels. Three of them showed an eastward movement along the Chatham Rise. The data from the fourth eel’s tag had a gap for the first three weeks (by which time the eel was in Hawke Bay), but then she swam south, also to the Chatham Rise. While information from these tags did not shed much light on possible spawning areas, the daily temperature variations indicated that the eels were moving significant vertical distances through the water column, and we were able to calculate that they swam at speeds ranging from 26 to 31 km per day.

Round two – with new, improved tags

A second batch of 10 tagged eels was released from Te Waihora in May 2001. Tags for these fish included a pressure sensor to record swimming depth. Unfortunately, we received significant information from only three of the tags, which stayed attached for periods ranging from 26 to 161 days. The third tag surfaced 160 km northeast of New Caledonia; this indicates that the spawning grounds for longfins is in the tropics, something we had assumed but were unable to prove.

As these three eels all swam too deep for the tags to record surface light, we were unable to accurately determine their swimming tracks. However, we did obtain some very interesting information on swimming depths. We were surprised to find that all three eels showed regular daily vertical movements through the water column – two of the three frequently swam to depths of 800 m or more, with the greatest depth recorded being 980 m. Why would migrating eels expend energy on daily dives of many hundred metres? We suspect the answer was to avoid predation, as various sharks, swordfish, and toothed whales are known to make regular dives to similar depths. We assumed that during daylight eels were diving to those depths to avoid these predators. Even in the tropics, water temperatures encountered by the eels at these depths were only 5–6 °C, too low for efficient metabolism. When the eels ascended during the evening to shallower and warmer waters, it was presumably to warm up. So, while we still have not found the spawning grounds of longfins, we did obtain very interesting information on swimming speeds and depths and behaviour of migrating eels.

Next step: satellites and models

Our next attempt to solve the mystery of where longfin eels go to spawn will use surface-dispersal modelling and data from satellite measurements of surface currents. Our models will indicate whether prevailing surface currents could enable longfin eel larvae to be passively transported to New Zealand from a range of possible spawning areas in the South Pacific. Preliminary data indicate this is a promising option, but that our transport model must include active swimming by the larvae themselves.

Dr Don Jellyman, who specialises in the biology and behaviour of eels and other freshwater fish, is based at NIWA in Christchurch. The study was generously funded by the University of Tokyo.