This research project focuses on modelling atmospheric chemistry and climate from the surface to the top of the stratosphere, using sophisticated chemistry-climate models.

The research areas include:

The research started in 2002 and has revealed a number of key findings to date. We have contributed to international modelling efforts that have informed the 2010 World Meteorological Scientific Assessment of Ozone Depletion and the 2007 IPCC 4th Assessment Report of Climate Change.

Our planet is now entering what is known as the "Anthropocene".

The composition of the atmosphere is changing faster than at almost any time in the Earth's history, and human activities are the main cause. Consequences include climate change, stratospheric ozone depletion, and regionally poor air quality. International treaties and national policies have been introduced to combat ozone depletion and to improve air quality; these have often been successful. In particular, the Montreal Protocol of 1987 is credited with preventing further dangerous damage to the stratospheric ozone layer.

However, climate change remains the great unsolved problem of our time, and it is linked to all other aspects of atmospheric chemistry. For example, stratospheric ozone changes are also exerting a strong influence on climate in the Southern Hemisphere, and ozone recovery will interfere with global warming caused by increasing concentrations of most greenhouse gases. Likewise, tropospheric air quality and the capacity of the troposphere to cleanse itself of pollutants are also impacted by both climate change and ozone recovery. Conversely, tropospheric chemistry can affect climate, e.g. through a feedback mechanism involving the removal of methane. Much of this research is centred on ozone, which is both a UV absorber and a potent greenhouse gas, and is chemically linked to many other greenhouse gases.

We have incorporated atmospheric ozone chemistry into chemistry-climate models. In these models, ozone and other trace gases are now explicitly predicted, and changes in their concentrations affect the radiation balance of the Earth, with consequences for temperature, winds, and transport of constituents. These models are used in various configurations, e. g. to simulate Antarctic and stratospheric ozone depletion and its impact on climate and air quality. Focussing on tropospheric chemistry, the models help us understand the sources and sinks of tropospheric ozone and changes in the self-cleaning capacity due to climate or stratospheric change.

While the basic science of Antarctic ozone depletion is now quite well understood, and policies have been enacted to prevent further damage to the stratospheric ozone layer, the links between ozone depletion and other components of the climate system are now beginning to emerge.

We have contributed to the international Chemistry-Climate Model Validation (CCMVal) activity, which focuses on the evolution of the stratospheric ozone layer during the 20th and 21st centuries. Results from this activity have informed the World Meteorological Organization Scientific Assessment of Ozone Depletion: 2010, which reassesses the state of knowledge of stratospheric ozone science every 4 years. We are also contributing to the Atmospheric Chemistry & Climate (AC&C) activity, which focusses on tropospheric chemistry and informed the 5th Assessment of the Intergovernmental Panel on Climate Change (IPCC), published in 2014.

Our simulations suggest that wintertime surface ozone over the southern middle and high latitudes will increase over the next century, as a consequence of both stratospheric ozone recovery and climate change (figure 1). Compared with polluted areas in the northern-hemisphere, the modelled surface ozone is not alarmingly high; it will, however, affect a very large area of the globe, meaning the additional ozone will contribute appreciably to southern-hemisphere climate change. Also, by raising the background concentration of ozone, dangerous high-ozone episodes will become more likely.

Making such a prediction with confidence requires the use of a highly coupled model, incorporating tropospheric and stratospheric chemistry as well as all the components usually associated with a climate model, such as a representation of the ocean. The ocean is a novel feature in our model. It allows us to study the interactions between changes in atmospheric composition, e.g. the ozone hole, and changes in the state of the ocean and sea ice. 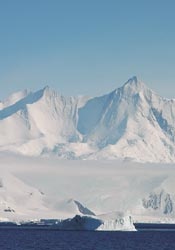 Clear sky above Mt Herschel (3,335 m), Antarctica. The extreme cold of the stratospheric air over the polar region aids the breakdown of ozone. [John Mitchell] A detail from this map.
Research subject: AntarcticaAtmosphereChemistryModellingOzone