For almost a century the Mason family of Feilding have been keeping a closer eye on the weather than most people.

But now, at 94, Alan Mason is looking for a successor.

Every morning about 7am he checks his rain gauge and opens the hatch on his purpose made thermometer board and then heads up to his office and emails the information to NIWA.

Mr Mason is one of a network of about 400 dedicated volunteers around New Zealand who measure weather data daily to add to an invaluable database used by climate scientists in their research.

“What I do is go out at 7am and first of all see if there’s anything in the rain gauge, and read that in millimetres. Then I have a thermometer on the ground for the grass temperature and record the maximum for the previous day and the minimum overnight. Then I have a look at the sky and decide how much cloud there is and the wind direction.

“Then I go upstairs and then I boot up my computer and send it all in."

Mr Mason’s father Frank took over the Feilding recording in July 1917. When Frank died in 1956, Alan’s brother Sam carried on. But according to Alan he was keen on fishing and would “disappear at the weekend so I did it”.

If he’s away a friend steps in so in 98 years there hasn’t been a day missed.

The weather is important

Mr Mason says he keeps on taking the measurements because “the weather is so important to us”.

“We are an agricultural and pastoral country and let’s not forget that we are dependent on our soil for our wellbeing. Weather plays such a large part in it, it’s the least I can do to help things along.”

But Mr Mason is now looking for someone to take over his labour.

The Niwa network of weather volunteers used to number about 1500 but a combination of people moving and an increasing number of automated stations has seen the network drop.

“It is a big commitment and a great network. What they do is fantastic and we treat it like gold.”

New Zealand’s climate network dates back to 1841 but records were sporadic until the 1860s. The earlier rainfall observations in the database were made by the Royal Engineers at the Albert Park Barracks, Auckland, in 1853.

The database is used extensively by scientists, students, engineers, planners and others and Mr Harper says the volunteers make a significant contribution to further New Zealand’s climate knowledge

The observers come from all walks of life and it was not unusual for different generations of the same family to continue the practice. “Over the years we have known of  several volunteers older than Mr Mason, one of whom retired at 102.”

The volunteers all use standard instrumentation and methods recommended by the World Meteorological Organisation, to ensure the data can be compared.

And in all his years of weather measurements, there’s one thing that puzzles Mr Mason.

“I’ve tried to analyse the figures, but I can’t see any pattern at all.” 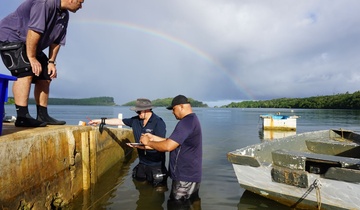 ‘Tis the season for a Christmas weather forecast… The week it snowed everywhere