At about 30km long, the Bumbu catchment may be short by New Zealand standards, but it cuts through the country’s second biggest city of Lae, which has more than 5,000 people living on its banks – many of whom have migrated to the city and are living in informal settlements.

The river is prone to erosion and flooding in the rainy season and the damage can be catastrophic.

This year, NIWA completed a project that aims to help build community resilience against flooding in the Bumbu River and contribute to improving Papua New Guinea’s disaster preparedness in the face of increasing climate-related disasters.

NIWA and PNG staff installed a hydro-meteorological monitoring network and early warning system for floods, in a pilot scheme for the river. Throughout the installations on-the-job training and capacity building of PNG personnel was conducted with staff from the key national and provincial government agencies. The network comprises three river water-level stations and five automatic rain gauges in the Bumbu catchment, as well as automatic weather stations in five surrounding provinces.

It was a challenging project for NIWA’s technical team. Sites had to be selected according to security and ease of access, while some of the main river channels changed too often for them to be reliably monitored. “We made our decisions on monitoring locations after engaging with relevant technical agencies and the local community. You have to think about the future – these sites won’t exist for long if they can’t be easily maintained, so they can’t be too difficult to get to,” NIWA Principal Scientist – Environmental Monitoring Graham Elley said.

“One remote weather station was installed at an ex-provincial governor’s family house, and one that was even more remote was placed in a village where responsibility for its continued operation was assumed by the head of the village.”

Once the monitoring and data collection systems were installed, standard operating procedures were developed and tested during a flood simulation exercise held for about
30 stakeholders from the key agencies involved in flood warning and disaster response, to ensure they understood what to do when a flood warning is issued. Mr Elley said the simulation was considered by most participants to be an outstanding success and led to positive refinements being made to the monitoring and flood warning system.

The Papua New Guinea government sees the pilot flood early warning system as a major milestone for the country that will hopefully be replicated in other major rivers.

The data produced by the river monitoring sites will also be invaluable for other development planning in the Morobe Province because it has been many years since the last significant hydrological monitoring data was collected.

Mr Elley said the challenge now is to sustain the monitoring system. “There is no use in having monitoring sites if there is no way of maintaining them”.

“Advances in monitoring and telemetry technology are enabling us to do more for Pacific hydro-meteorological agencies than we have previously, because we can now more easily provide remote technical support.”

Mr Elley said NIWA was trying to maintain high levels of commonality in its work across the Pacific region so nations facing similar issues can begin to support each other.

“Countries across the Pacific all have similar challenges and shared experiences, meaning that communication with each other can help to refine development needs and resolve problems.”

The data produced by the river monitoring sites will also be invaluable for other development planning for Morobe Province because it has been 22 years since since the last hydrological data was collected. 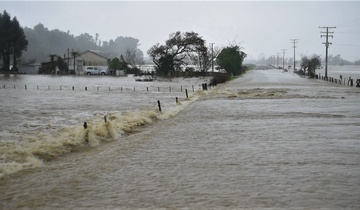