Coming from the Japanese word 'harbour wave', tsunami are a series of waves – with wave lengths up to hundreds of kilometres between crests - caused by undersea seismic disturbances.

Ground displacement (movement) due to undersea earthquakes is the most common cause of tsunami. However, they may also be caused by submarine landslides, volcanic eruptions and caldera collapses, and even large meteorite impacts.

Tsunami may travel across entire ocean basins. For example, an earthquake in South America could trigger a tsunami that could severely impact New Zealand.
In the open ocean, a tsunami wave may only be a matter of centimetres high. Its height increases as it approaches shore and slows down, due to the water depth becoming shallower. Tsunami waves can be several to tens of metres high when they hit the shore.

Tsunami can cause serious flooding of coastal areas. Large tsunami may inundate many kilometres inland.

The waves which initially hit the coast, followed by flooding spreading inland, can cause serious damage to infrastructure (including buildings and roads), land, crops and livestock. They can also result in injury or loss of human life. Strong currents may also cause damage to ships and coastal infrastructure.

Incidences of tsunami in recent years

New Zealand is at risk from tsunami due to its long coastline and its position on the Pacific Rim of Fire. Steep undersea canyons such as the Kaikoura Canyon and the Cook Strait Canyon are also areas of potential submarine landslides which can cause dramatic local tsunami.
NIWA's research into this natural hazard covers underwater earthquake faults and landslides, tsunami propagation and inundation modelling, post-disaster surveys and risk/loss assessment. 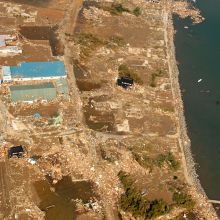 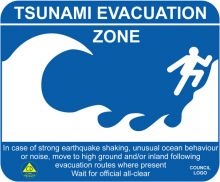 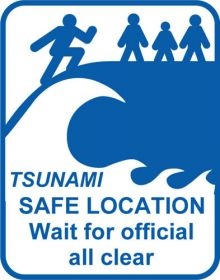 RiCOM grid coloured according to depth. In deeper water larger triangles can be used. In shallower areas, especially those with complex coastline, the grid grades to smaller triangles for finer resolution. Solid colours in the figure indicate where the triangles are so fine that they blend together.