Dynamic, processed-based integrated catchment models have the ability to simulate the changeable behaviour of complex processes in catchments. Since direct field measurements are rarely available at large-scales, these models help us to better understand hydrological and water quality processes.

NIWA Catchment Modeller Linh Hoang says, “For this study, we applied the Soil and Water Assessment Tool (SWAT), to simulate streamflow and nitrogen exports in the Toenepi River catchment in the Waikato Region.

“The Toenepi catchment is a typical New Zealand dairy farming-dominated catchment and has been used in previous NIWA research projects, including being one of the focus catchments of the Dairy Best Practice Catchment project.” Based on the calibrated SWAT simulation, the annual average water balance for the period 2004-2015 is presented in Figure 3. During this period, the annual rainfall was 1010 mm, around 606 mm was lost to evapotranspiration, 127 mm was recharged to the groundwater aquifer, a very small amount was lost to the deep aquifer, which is considered loss from the catchment. Approximately 394 mm (39% of rainfall input) entered streams through four different pathways: surface runoff, lateral flow, tile drainage and groundwater flow. Tile drainage was predicted to be the most significant contributor with 51%, 18% of streamflow was contributed by surface runoff,  28% was from groundwater flow and 3% was from lateral flow. Nitrogen was lost from the catchment in different ways (Table 1). A huge amount of nitrogen in soil is used by plants which then are eaten by cattle (365 kg N/ha). A proportion of the consumed nitrogen was returned to the catchment as manure from cattle. Nitrogen was also removed by denitrification (58 kg N/ha) and ammonia volatilisation (40 kg N/ha). Some organic N (1.1 kg N/ha) was lost to erosion. The biggest concern was the amount of nitrate transported to streams, which was estimated to be 19 kg N/ha by . The model predicted that tile flow was the dominant pathway for nitrate transport to the stream, accounting for 96.3% the total nitrate load. Surface runoff contributed another 2%, lateral flow 1.5% and groundwater flow the remaining  0.1%. 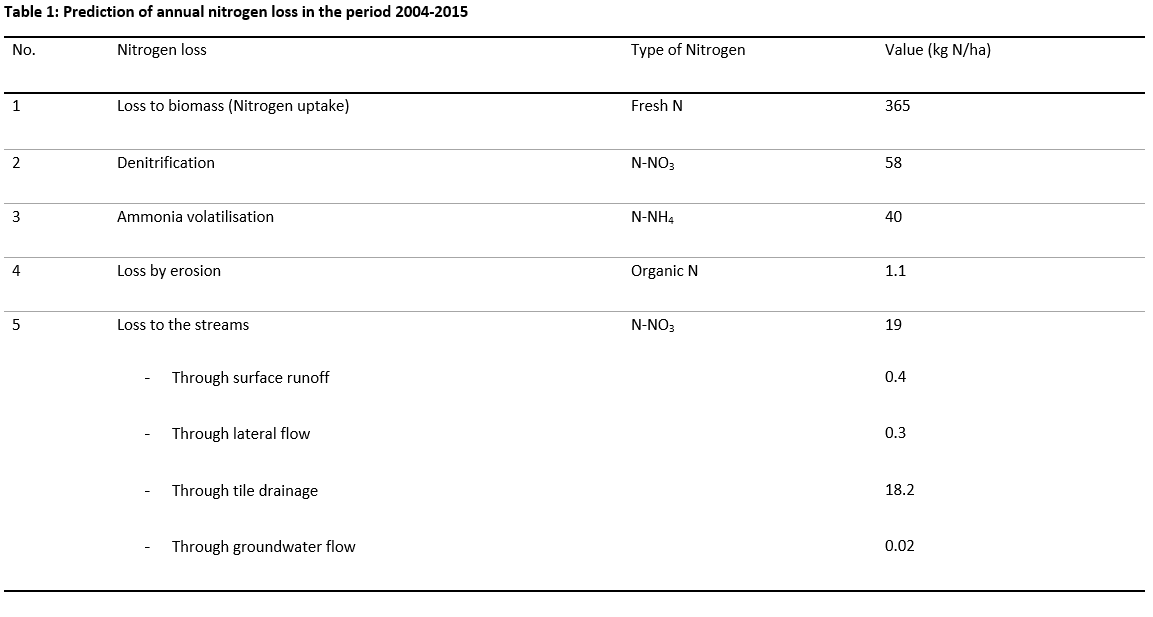 Based on good model performance, SWAT proves to be a good tool for water quantity and water quality predictions and a suitable modelling tool for New Zealand conditions. The model estimated that subsurface drainage is the main contribution to streamflow in the Toenepi catchment, and consequently is the dominant pathway for nitrogen transport to the streams. While monitoring the catchment outlet can provide information on contamination export from a catchment, dynamic catchment modelling allows the breakdown of contributions from various sources and their relative importance. Such information can be valuable for catchment management plans.