Growth rings in stalagmites can tell us about past climates.

Speleothems – more commonly known as stalactites, stalagmites and flowstones – are limestone deposits that form when calcite (CaCO3) is released from water droplets that have percolated through rock into a cave. Most speleothems are clear or white in colour, although, depending on the surface above the cave through which the rainwater must percolate, speleothems can be orange-red, rusty-brown, grey-black and even green. Like trees, speleothems form growth rings, and these may be laid down over hundreds or even thousands of years. The rate at which these growth rings form depends upon the amount and rate of rainwater entering the cave, the amount of acidity and minerals in the rainwater, and the temperature and humidity conditions within the cave. In dry periods, growth rings may not appear at all, and if we have optimum conditions they may grow a lot. Importantly, these growth rings also retain various isotopes such as oxygen 18 (18O) and carbon 13 (13C) which vary with changes in temperature and rainfall.

NIWA climate scientists, in association with Professor Paul Williams (University of Auckland), are examining isotope records from New Zealand stalagmites. The information will be used to reconstruct and interpret past temperature and rainfall in different regions of New Zealand. We expect the temperature reconstructions to improve our understanding of recent warming trends in the Southern Hemisphere and to tell us if we lead or lag Northern Hemisphere climate change and variability.

A chronology from Waitomo 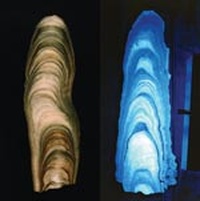 Cross-sections of two stalagmites. Ultra-violet light has been used to illuminate the growth rings in the photo on the right. The two stalagmites are approximately 50 cm long. (Photos: P. Williams) 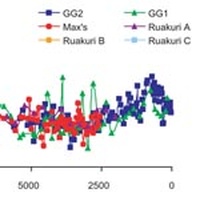 We are comparing stalagmites collected from caves in various parts of the country: Waitomo (western North Island), Hawkes Bay (eastern North Island), Nelson–Hokitika (north and west South Island) and Fiordland (south-western South Island). Each stalagmite is cut into two, lengthwise. The halves are polished so that the growth rings show up clearly, and sub-samples are drilled from along the growth axis. A selection of these samples is dated by uranium series using thermal ionisation mass spectrometry (TIMS) – a technique that provides highly accurate and precise measurements of an element’s isotopic composition.

Using data from six stalagmites from Waitomo, we have been able to produce a 14,500-year BP master chronology for delta 18O and delta 13C, based on 24 TIMS dates (see graphs). The six delta 18O records show good agreement in general trends, but considerable variation in detail. This underlines an important premise when interpreting speleothem records: don’t place too much weight on a single speleothem record.

A significant achievement from the Waitomo master chronology is the moderate-to-strong positive correlation of speleothem delta 18O with the historical temperature record. This indicates that as the temperature warms delta 18O becomes less negative, and vice versa. The master chronology also provides excellent evidence of low-frequency periodicity (500–1500-year cycles) in the variability of temperatures, with embedded high-frequency swings in mean annual temperatures. We are still completing master speleothem chronologies for the other regions sampled.

The next stage in this project is to develop a reliable way to translate the isotope chronologies into temperature and rainfall chronologies. This will allow us to superimpose annual-to-century-scale climate information from tree rings onto the millennial-scale baseline record provided from speleothems. The speleothem chronologies will be verified against annually resolved New Zealand tree-ring chronologies. Both will be validated against the instrumental record for the last 150 years. The records will be made available for the calibration and verification of hindcast computer models of climate variability and change.

Darren King and Jim Salinger are based at NIWA in Auckland. Paul Williams is from the University of Auckland’s School of Geography and Environmental Science.