Managing the seabed with multibeam mapping: learning from Canadian experience 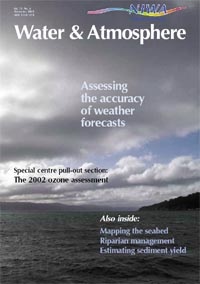 New technologies for mapping the seafloor, combined with a range of databases, have become essential tools for seabed management in Canada. New Zealand is working towards adopting the same ideas.

Only recently have oceanographers been able to map the seabed in something near the detail possible on land. Using acoustic technology we can now produce accurate, aerial-like images of the seafloor. The technique is called multibeam mapping (see Water & Atmosphere 9(2): 24–25). Its earliest applications were simply to survey the seabed for shipping purposes. However, from a scientific point of view, the technique is capable of much more.

To marine geologists, multibeam surveys are essential to find out the shape of the seabed and to help understand how it was formed. But the surveys also provide a framework for improved planning and management of fisheries, mineral resources, seafloor engineering activities, and natural hazards. 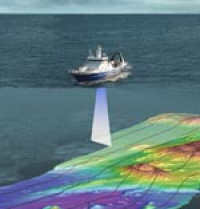 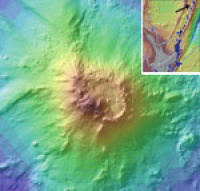 Multibeam bathymetric image of an active submarine volcano from the Kermedec Ridge. 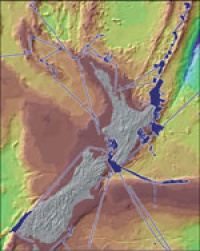 Areas where multibeam images of the seafloor around New Zealand have been acquired on RV Tangaroa since May 2001.

The Geological Survey of Canada and the Canadian Hydrographic Service have been at the forefront of developing multibeam technology and its application to marine geoscience. Multibeam systems not only provide images of the seabed shape, but different applications are possible because the strength of the return signal, or “backscatter”, can be used to indicate sediment type or seabed hardness (see “Using sound waves to sort out seafloor sediment types”). In some areas, mapping has been followed up with sampling surveys using traditional marine geoscience tools such as corers and cameras. This combination has enabled the geology of parts of offshore Canada to be reinterpreted and mapped at much higher resolution than was previously thought possible. Such detailed maps have proved invaluable in surveys for offshore hazards, for facilitating the safe exploration of hydrocarbon reserves, and for the routing of pipelines and trans-Atlantic fibre optic communication cables. The maps have also helped with the development of new ideas about the glacial and sea-level history of the Atlantic margin.

One surprising application of the new technology has been in mapping the distribution of plants and animals living on the continental shelf floor. Water depth and type of sediment are the main factors that influence which plants and animals can live where. So, standard multibeam bathymetry maps combined with information about sediment type interpreted from multibeam signal data have been used to design efficient seabed surveys. Targeting the range of habitat types indicated from the combined multibeam information minimises the amount of sampling required, yet provides a complete description of community structure over an area.

The resulting maps have proven extremely popular. For example, they are used by the commercial scallop fishing fleet off Nova Scotia (see Imaging the ocean floor). Benefits from more efficient fishing and reduced damage to benthic habitats have encouraged the fishing industry to invest in a charting programme of its own. Fisheries managers use the improved stock assessments from areas surveyed by multibeam to set quotas and develop sustainable harvest plans. Habitat mapping from multibeam is providing a much stronger knowledge base from which a sustainable fishery can be collectively managed by government and the industry.

In 1997, Canada enacted the “Oceans Act”, providing the Department of Fisheries and Oceans wide-ranging powers to manage offshore resources in a sustainable and precautionary manner. Marine Protected Areas are being proposed and management plans developed for Large Ocean Management Areas. Collaborative research in seafloor mapping between the Geological Survey of Canada and the Department of Fisheries and Oceans is providing the seafloor maps and databases needed to support the management framework.

Another notable initiative in Canada has been the joint development by the Department of Fisheries and Oceans and Natural Resources Canada of the visionary “SeaMap” programme. SeaMap aims to map Canada’s offshore lands for bathymetry, surface sediments and associated seabed plants and animals from the coast to outer territorial limits. The programme is currently under consideration by Federal Government for funding. In the meantime the two departments are collaborating to deliver pilot SeaMap projects off the Nova Scotia coast, in the Beaufort Sea and offshore British Columbia.

The Geological Survey of Canada has been collaborating with NIWA researchers to help develop a framework for applying seafloor mapping to issues of ocean management in New Zealand waters. NIWA’s research vessel Tangaroa carries an advanced multibeam mapping system capable of surveying large swaths of the ocean floor. As part of its geological, oceanographic, and fisheries research, NIWA has been collecting high-resolution sea-floor images from selected areas around New Zealand for the last two years. We are now developing an unprecedented insight into the shape of the ocean floor – its ridges, valleys, plateaus, canyons, and seamounts – as well as the processes that shape it, including landslides, active volcanoes, earthquake fault movements, and strong tidal currents that cause seabed scour and move sediments. The results of such surveys have important impli-cations for assessment of offshore hazards (such as earthquakes, tsunami, landslides), deep-water fisheries, and mineral resources.

In order to understand more about the seafloor sediments, recent work at NIWA has investigated the significance of the strength of the backscatter multibeam signal. The idea is to use the results to map areas covered by different types of sediments or rock. Following the Canadian example, we propose a pilot study to develop integrated maps in a region of importance to a wide range of end users.

All this can potentially lead to an advanced seafloor mapping programme, adding value to the multibeam data and helping to reinterpret the geological and biological landscape around our shores.

From a starting point of bathymetry and acoustic multibeam backscatter images, we can add in geological data (for example, from sediment samples, bottom photographs, and side-scan sonar images). Information from databases on animal and plant life, and fisheries can also be incorporated. All this will greatly enhance our ability to generate geo-referenced maps of benthic habitats and sea-floor substrates. The images will highlight the earth and water processes that shape the ocean floor.

As in Canada, this system of integrating data looks promising for improved assessment of hazards and submarine resources, and will assist with safer planning and positioning of major engineering infrastructure. Another immediate economic benefit is likely through targeted, more efficient and sustainable fisheries.

Richard Pickrill is a Group Manager at the Geological Survey of Canada (Atlantic), Dartmouth, Nova Scotia. He was formerly at the New Zealand Oceanographic Institute and NIWA. Phil Barnes is based at NIWA in Wellington.