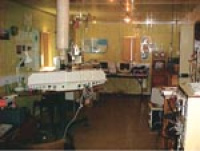 The interior of the Arrival Heights laboratory.

NIWA’s 2002–03 field programme of atmospheric measurements in the Antarctic is being capably supported this year by Kim Thomas.

Kim, resident at Scott Base from August 2002 to January 2003, also spent the winter of 2000 on the Ice as Antarctica New Zealand’s science technician and was responsible for the autumn and winter operation of NIWA’s instruments. That experience (and her skilled dedication) allowed Kim to take sole responsibility for performing measurements during this year’s critical ozone hole period.

The data collected by Kim with the Dobson spectro-photometer this year are in sharp contrast with those from previous years. The graph shows total ozone values in Dobson Units (DU). The individual measurements are shown for 2000, 2001 and 2002, along with the average for the 1990s. The values in excess of 400 DU in late September 2002 are unprecedented. The ozone hole this year was disrupted by a major warming, the first ever seen in the Antarctic and the largest recorded in either polar region. The hole partially reformed after this warming but then dissipated by the start of November.

This does not appear to be a signal of long-term recovery of the ozone hole, as some have reported, but is a highly unusual dynamical event.

Kim Thomas’s position is jointly supported by NIWA and Antarctica New Zealand. Gordon Brailsford, Karin Kreher, Mike Harvey, Robyn Schofield, and Rebecca Batchelor have made important contributions to the science discussed. This work was funded by the New Zealand Foundation for Research, Science, and Technology under contract C01X0204.

NIWA’s first web-based version of the Tide Forecaster will help you with these types of enquiries. It is now available as a public, free-to-air service

The forecaster is based on an ocean tide model developed by Derek Goring and Roy Walters (NIWA, Christchurch). Times and heights of high and low tides can be calculated for any open coast or ocean site around New Zealand. Up to 28-day forecasts for the selected site can be down-loaded from a given date.

At this stage, the model does not include harbours, so to obtain more accurate results than the Tide Forecaster the user should use the Land Information NZ website for Standard Ports.

Another added-value service NIWA provides is a list of red-alert days when tides will be very high. This can be used as a rudimentary warning system for coastal flooding, by keeping a watchful eye on weather systems (e.g., low-pressure systems, high winds and waves) during these red-alert periods. There is a link to the red-alert days on the Tide Forecaster page.

NIWA is leading an exciting project in the Hokianga and western Kaipara, Northland, which draws together the expertise of a number of Crown Research Institutes. The goal is to create an accessible community climate and soil knowledge base in order to identify potential cropping regions.

The Far North and Kaipara District Councils wanted to diversify land use away from the typical kumara agricul-ture and forestry to create economic opportunities. Over a series of public meetings community groups identified 10 crops of interest, most of which are grown on smaller blocks of land, with relatively low capital investment and labour skill requirements. Often the crops were noted as being “niche”, because of the proximity to the Auckland market, and the earliness of crop development due to Northland’s relatively warm climate. The crops selected were bananas, Maori potatoes, manuka (for oil), mate tea, cherimoya, figs, avocados, peanuts, blueberries, and hydrangea.

The project draws on expertise from NIWA (climate), Landcare Research (soil), and Crop & Food and HortResearch (crop requirements) to identify areas in the study region which show potential for the 10 selected crops. The potential maps are produced using GIS (geographical information system) methods, based on climate layers (rainfall, temperature, wind, growing degree days, frost risk, etc.), and soil layers (type of soil, slope, soil acidity, potential rooting depth, drainage, etc.), and optimising individual crop requirements for growth. The project is cost-effective in that it uses existing data sources to identify potential sub-regions for particular crop activities. Further soil sampling and climate sensing may be required in those sub-regions to confirm the results seen in this study.

An example for cherimoya is shown above (click to enlarge). Seven soil and climate parameters were identified as important to the growth of this crop, ranging from winter chilling to soil drainage class. Each crop requirement has been assigned a suitability rating of 0, 1 or 2: 0 represents values that are unsuitable for the crop growth; 1 represents values that are marginal; and 2 represents optimal growing conditions. GIS analysis enables a map of overall suitability to be presented by summing the individual suitability ratings. Hence, the highest rating in the overall suitability map would be 14. It is evident that there is one main “micro climate” that shows high potential for cherimoya, shown in dark green.

Information about the climate and soil of the region, and specifics relating to the selected 10 crops, will be accessible to the public via the Far North and Kaipara District Councils and local libraries in May 2003. A plain-language booklet with around 50 colour maps will explain the study and its results, and will be posted on their websites by these councils.

Collaborative projects like this one show the power and potential of multi-disciplinary science – and the results will form a knowledge base of soil and climate in this area for years to come. 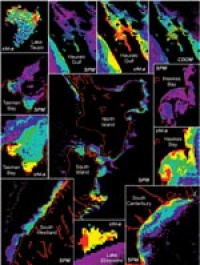 To an optical oceanographer, there are only two kinds of water out there. First there are those blue and green-blue waters that are coloured exclusively by the local phytoplankton population. These largely oceanic waters are optically simple and readily yield their bio-optical secrets to ocean-colour sensors on satellites.

Then there are all the others – the optically complex waters that include muddy river mouths, turbid lagoons and inland lakes, coastal waters laden with sediment from eroding cliffs or beaches, and estuaries and fiords receiving yellow substance leached from the land.

Most of New Zealand’s coasts and inland waters fall into the second category. Powerful new techniques for obtaining the constituents of these waters from their remotely sensed colour are now available, giving us an unprecedented ability to determine the composition of New Zealand’s coastal and inland waters from space. The first satellite images of suspended particulate material (SPM), chlorophyll a concentration (chl-a, a proxy for phytoplankton abundance) and dissolved coloured organic matter (CDOM) processed at NIWA are shown. Such 1-km-resolution data will be available until at least 2015, courtesy of Earth-observing satellites from NASA and the European Space Agency. This new capability has relevance to a number of existing NIWA research projects, and the ocean colour group looks forward to working collaboratively with them to develop applications of ocean-colour remote sensing for the future.

A number of agencies, government departments and councils have become very interested in understanding more about the health effects of air pollution in New Zealand. Although it is not a problem on the same scale as in many other parts of the world, it is still an issue of concern.

NIWA is leading a consortium of researchers in a large new study to determine what the health effects are, their causes, the costs associated with these effects, and the potential range of policy options to reduce them. The funding for the project is a joint initiative between the Health Research Council, the Ministry of Transport and the Ministry for the Environment. The $1M project runs over three years and will feed a number of results back into various related projects and policy developments.

The research team comprises experts from NIWA, the Wellington Medical School, the Christchurch School of Medicine and Health Sciences, the Australian National University, the University of Canterbury, Landcare Research, and private consultants and students. Some 20 people are involved, covering a range of specialities from basic air quality science, modelling, epidemiology, toxicology, economics, policy and Maori issues.

The project has been structured into discrete components, with strong links across the various activities. The first step is to assess the extent of air pollution, who it might be affecting, and when. The next step is to calculate the medical and biological effects on people. This part of the project is being supplemented with a new study, which is gauging specific effects on a group of school children in Christchurch. Once the effects are known, the costs and economic implications need to be assessed, and a range of actions and policy options suggested for improving the situation.

Initially we will conduct a prototype study on Christchurch, to get a better understanding of effects of poor air quality there and to trial the economic and policy assessment methodologies. Results will be published as they become available, with the full prototype study finished by the end of 2003.

NIWA scientists help phytoplankton to bloom in Gulf of Alaska 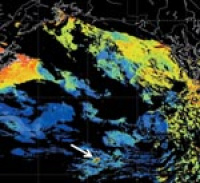 In about 25% of the world’s ocean, including the Subantarctic Waters to the south and east of New Zealand, phytoplankton (microscopic plant cells) exist in low numbers despite the excess amounts of plant nutrients, such as nitrate, in surface waters. This enigma is caused by a low supply of an essential trace element – iron – in these high-nitrate low-chlorophyll (HNLC) waters, and hence the plant cells are anaemic and grow poorly.

NIWA scientists successfully conducted a large-scale iron enrichment in the HNLC waters of the Southern Ocean in February 1999. In that experiment – called SOIREE (Southern Ocean Iron RElease Experiment) – an 8-km x 8-km patch of ocean was labelled with a highly sensitive chemical tracer (SF6) to track its movements, and enriched with a solution of dissolved iron. Phytoplankton grew in response to the iron enrichment and concentrations in the water increased five-fold, with concurrent changes in important climatically reactive gases such as carbon dioxide and dimethyl sulphide (DMS).

In July 2002, NIWA scientists Cliff Law and Philip Boyd coordinated another large-scale iron-enrichment experiment in the temperate waters of the Gulf of Alaska in collaboration with Canadian scientists, as part of their national SOLAS (Surface Ocean–Lower Atmosphere Study) programme. The aims of the Gulf of Alaska experiment – called SERIES (Subarctic Ecosystem Response to Iron Enrichment Study) – were similar to those of SOIREE, and would therefore provide a contrast between temperate and polar HNLC waters and the response of the ecosystems to iron supply. SERIES also attempted to look at the fate of gases, such as DMS, produced by the plankton bloom. DMS is thought to be a key contributor to processes controlling the formation of clouds. Therefore a large component of SERIES involved atmospheric measurements.

The experiment involved three vessels: the Canadian Coast Guard vessel John P. Tully, a Mexican vessel El Puma and, later in the experiment, a Japanese research vessel Kaiyo-Maru. A patch of HNLC ocean of around 70 km2 was labelled with SF6 tracer and enriched with dissolved iron. The result was a more than tenfold increase in phytoplankton stocks, the removal of large amounts of carbon dioxide, and the production of DMS. The phytoplankton bloom grew to be large enough (700 km2) to be visible from space (see arrow on image) and yielded exciting results for both marine and atmospheric scientists. It was possible to follow the production of DMS in the ocean during the plankton bloom, and also its subsequent transfer to the lower atmosphere.

The findings of this experiment will benefit the design and implementation of a similar experiment to be conducted in late 2003 by NIWA and other New Zealand university marine and atmospheric scientists as part of the New Zealand SOLAS programme, the aim of which is to investigate links and transfers between the ocean and the atmosphere that are key drivers of climate.