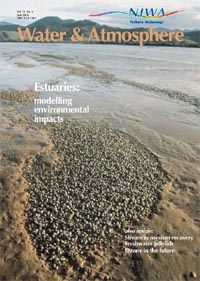 Waves generated in shallow, enclosed estuaries can have a big impact on marine life. Computer modelling of these wave systems is helping us to predict their effects.

A familiar sight along New Zealand’s coast is waves growing, steepening and breaking as they approach the shore. Even to the most casual observer it is clear these waves must have major impacts on any aquatic plants tough enough to grow beneath them. The waves can also stir up sediment, which can smother plants and prevent larvae settling and becoming established.

Waves in estuaries and harbours are less dramatic. While large ocean swells are usually prevented from entering these enclosed systems, local winds can still produce significant waves. Their effects on beaches, structures (e.g., jetties) and boats is well known, but they also play an important part in shaping the habitats beneath the water surface. The ecosystems in these areas adapt to smaller waves – for example, less robust plants can grow there.

In shallow estuaries, waves move the water close to the seabed, stirring up sediment and small animals, which can then be transported by tidal currents. While this process can be a problem in some situations, it can also be a blessing. For example, extreme rainfall events in the hills can send large amounts of clay down rivers, smothering estuarine plants and animals. NIWA studies have shown that without waves to stir up and remove the sediment, the marine life on the seabed can quickly die.

Waves, and the sand and mud they stir up, strongly affect the settlement and viability of plants along coasts and in estuaries. Kelp can survive in high wave-energy coastal settings such as this, where it is the dominant plant.

The wind initially feeds energy into small waves, increasing their height. When the waves have had enough time and distance to build up, they keep pace with the wind and stop growing. Waves with long wavelengths are more energetic than waves with short wavelengths: they not only travel faster, but also grow larger than short waves before toppling over and breaking.

In deep water, wave height depends on wind speed and on the distance (fetch) and duration over which the wind blows. This all changes in shallow water because waves interact with the seabed, causing them to slow down and lose energy, resulting in a reduction in wave height. Tidal currents are also important in estuaries. When the current is moving in the opposite direction to the waves, the waves slow down, more energy builds up, and the waves get steeper. This is why estuaries such as the Manukau Harbour, which has a large tidal range, can be deceptively dangerous for boaties.

It is common to assume that the wind is constant when trying to predict waves, but this is seldom the case. The land around estuaries like the Manukau Harbour can be hilly or have large vegetation that slows down wind-speed and makes it more variable.

In complex situations like this we need to use sophisticated computer models; it is not realistic to rely on simple relationships between wave growth and fetch. Models can be used to map variations in wave forces and sediment re-suspension, and to test the effects of different wind conditions (e.g., predicting the effects of waves during extreme weather events). These models can greatly improve our ability to predict and manage changes in our coastal environment. 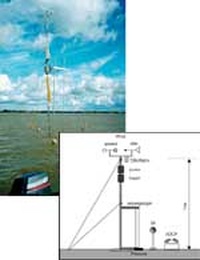 One of the recording sites – on a calm day. The diagram shows some of the instruments used: wave gauges, current meters (S4), current profiler (ADCP), and meteorological sensors.

Manukau Harbour as an experimental site

Field experiments are essential in understanding wave processes and developing better wave models. Only by comparing model predictions with real life can we discover any missing elements of the models. Improvements based on these comparisons increase our confidence in the models’ capabilities.

We took measurements at six sites along a 15-km line across the estuary using pressure sensors, current-meters, and high-frequency wire wave gauges. We also measured the wind speed at four sites across the estuary, which changed significantly according to the surrounding topography. 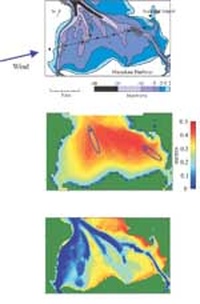 top: The bathymetry of Manukau Harbour strongly affects wave development.
middle: The model provides maps of wave height across the estuary for various wind conditions.
bottom: The pattern of wave motion at the seabed is shown here using different colours.

The ultimate test of how well we understand wave processes comes when we compare our attempts to model and predict waves with actual wave measurements. We recently implemented the SWAN model for shallow-water studies. This model was first developed in the Netherlands, but researchers around the world can now use it and suggest improvements. SWAN is the current state-of-the-art tool for modelling waves. What sets it apart from earlier models is that SWAN aims to describe the physics of such processes as forcing and attenuation without making any assumptions about the structure of the waves that eventuate. Forcing is applied by the wind; attenuation refers to the reduction in size of waves by wave breaking and friction with the seabed.

For tidal estuaries we also have to model the changing water depth and currents. This allows us to predict the effects of wave action on the seabed as it changes through a tidal cycle. We can then determine how much sediment is being stirred up, or the effect of the waves on structures and plants. The results can be displayed on maps (below).

This work is part of the FRST-funded research programme “Effects of Sediments on Estuarine and Coastal Ecosystems” (C01X0024).