Close-up of a sample from the Bongo nets.

We call them Bongos because of the resemblance of their shape to the drum set. These tows are done to measure mesozooplankton community biomass, species composition, grazing on phytoplankton, and food-web position. We pair them with the CTD so we can relate these measurements to other biological measurements, such as the phytoplankton and microzooplankton community, which constitute their main prey items.

The zooplankton sample gets separated into four equal parts, each of which is processed in a different way.

Between the catches of the Rectangular Midwater Trawl and Bongo net, we hope to get an integrated picture of the macro-zooplankton dynamics in the area. The two important macrozooplankton species are krill (Euphausia superba) and salps (Salpa thompsoni), with many studies suggesting a gradual increase of salps and concomitant decrease of krill in the Southern Ocean, associated with global warming. Because krill play such a pivotal role in the food-web (as major prey item for many birds and mammals), and salps can have a major effect on ocean biogeochemistry (through generating large, fast-sinking faecal pellets), these compositional changes can have very important effects for the ecosystem.

We also take water from the CTD to investigate patterns in the export of material from the surface ocean to depth. Several 4L reservoirs are filled with water from 9 depths spanning the upper 200m of the water-column. We measure the activity of a naturally-occurring radio-isotope, called thorium, that is produced by the decay of uranium (also natural in sea water) and sticks onto particles sinking out of the surface ocean. With this measurement we can get an estimate of the patterns of carbon getting delivered to the deep ocean, like areas with high and low carbon export, as well as temporal patterns through repeated measurements.

The Southern Ocean is a major sink for manmade CO2 released into the atmosphere, yet recent studies indicate its ability to absorb carbon dioxide changes over time, and this ability has been fluctuating recently. The export of carbon to depth is intimately tied to the size and composition of the phytoplankton community (with large cells leading to higher export because they sink faster) and the zooplankton community, which produce faecal pellets that can escape microbial degradation (depending on size) in the surface waters and sink quickly to depth. Using our measurements of the phytoplankton community, micro/meso/macro zooplankton community and size-composition, grazing rates, and export production, we hope to understand the processes influencing food-web structure and biogeochemical cycling in these areas of the Southern Ocean. Bongo net is put over the side. 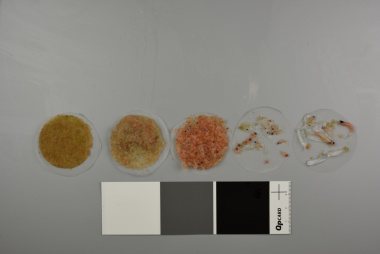 Zooplankton after it has been processed into 5 different size categories, which roughly divides up the community by ecological role.
Moira Decima, NIWA Moira pours the sample into a Folsom splitter, which allows quantitative subsampling of the zooplankton catch.
Pippa Low, University of Auckland 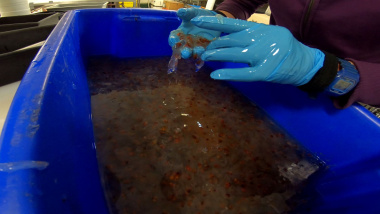