What is a model?

For instance, there are tide models that are mathematical, but there are also tide models that are, literally, machines built of gears, cams, shafts, pulleys, and so on. You can see one of these marvels at the website of the Proudman Oceanographic Laboratory. Both types of model do the same thing: they simulate tides. They don’t do this by causing water to actually rise and fall, however. Instead, they might, say, print a graph showing tidal variations in water level.

Much research today is aimed at continually expanding and improving models. To do this, we need to understand how things work, so that mathematical equations can be written, which are subsequently installed in the models. This is achieved by making field measurements with a range of sophisticated instruments (see photos, and SCAMP, below).

A particular area which we do not understand all that well is how sediments eroded from the land are delivered to estuaries during floods, and what happens to that sediment once it reaches the estuary. This is now receiving special attention (see article below).

Read our Water & Atmosphere article 'What happens in estuaries during floods?'

Models can be used to predict. For example: a model of tides in an estuary can predict current patterns throughout an estuary and how these change as the tide rises and falls. A sediment-transport model can be linked to the tide model to show how sediments are eroded from the bed by the tidal flows, how they are dispersed around the estuary by the tidal currents, and where in the estuary those sediments ultimately settle. The same estuary sediment-transport model can be linked to a model of sediment erosion in the catchment to show how suspended-sediment levels in the estuary change as a result of erosion in the catchment, and how that same erosion increases the rate of sedimentation in the estuary.

The USC-2 (Urban Stormwater Contaminant) model has been developed to make predictions of contaminant accumulation in estuaries over the next 50–100 years. Given a description of how the catchment is expected to develop, the model can predict where in the estuary and at what rate contaminants will accumulate.

The model has been applied recently as part of planning development of the catchment surrounding Auckland’s Upper Waitemata Harbour (UWH). Build-up of zinc, copper and polycyclic aromatic hydrocarbons (PAHs) in the bed sediments of 11 “subestuaries” of the harbour under a number of scenarios has been predicted. The “Existing” scenario provides baseline information against which future trends can be compared. The “Development #1” scenario is one possible way that is being considered for catchment development over the next 50 years, which includes a certain level of stormwater treatment.

The figure shows an example of predicted PAH concentrations in the surface sediments of the middle main body of the harbour. PAHs are predicted to exceed the Environmental Response Criteria (ERC) “red traffic light” sediment-quality guideline within the next 30 years under Development #1, which indicates probable biological impacts. That curve is bracketed by two other curves, one showing PAH build-up under the Development #1 pattern and intensity of urban development but with maximum-attainable stormwater treatment (which may come at considerable cost), and the other with zero stormwater treatment (which demonstrates the environmental gains made by the level of stormwater treatment already within the Development #1 scenario). A considerable gain in “time to traffic-light exceedance” (about 15 years) is won by improved stormwater treatment, which might justify the extra expense, given that new technologies for mitigating or avoiding contamination could emerge in that time.

It is worth noting that this is not true of every subestuary in the UWH. In some parts, the shift to maximum stormwater treatment on the land gains virtually nothing in the estuary, and in yet other parts a very small improvement in treatment is predicted to avoid guideline exceedance entirely. The difference lies in the complex connections between the various sensitive parts of the estuary and the various contaminant hotspots in the catchment, which is precisely what the model is intended to capture.

The model is run in a kind of iteration, with discussion of results after each loop, until an acceptable – and no doubt compromise – development strategy can be found. As part of this iteration in the Upper Waitemata study, it has been found that stormwater treatment alone may not deliver acceptable environmental outcomes in some critical parts of the harbour. This has turned attention to benefits that could be derived by new methods of source control, such as regulating galvanised building materials. The USC-2 model is providing the information needed to develop regional planning policies aimed at protecting estuarine receiving waters in developing catchments. 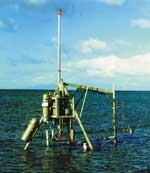 Instrument for measuring boundary-layer flows and sediment dynamics. It is submerged at high tide. [Malcolm Green]

Part of the Navier-Stokes equations for describing how water moves under the action of an external force. Such beasts are the building blocks of mathematical models of currents, waves and sediment movements in estuaries. [NIWA] 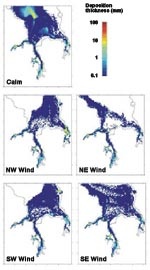 An example of predicted PAH concentrations in the surface sediments of the middle main body of the harbour. [NIWA]