A World Meteorological Organisation panel has confirmed a finding that a temperature of -25.6°C observed at Eweburn, Ranfurly in New Zealand on 17 July 1903 is the coldest temperature recorded for the Southwest Pacific Region.

Over the last several months, a WMO Commission for Climatology special international committee of experts conducted an in-depth investigation of the extreme for the Southwest Pacific region.

The investigation was conducted with the support of New Zealand’s National Institute of Water and Atmospheric Research (NIWA) for the WMO Commission for Climatology World Archive of Weather and Climate Extremes, the official WMO world meteorology-verified site for weather and climate extreme records.

The investigating committee was composed of climate experts from New Zealand, Australia, Libya, Spain, Egypt, France, Morocco, the United States, and Russia.  This international finding follows the discovery in 2011 of the 1903 temperature observation of -25.6°C.

The discovery occurred during the digitisation of historical daily records kept in paper format, which were not previously present in NIWA’s climate database. As part of the international WMO investigation, the additional discovery of a historic 1868 New Zealand meteorological report was uncovered by WMO committee member and NIWA climate scientist Gregor Macara.

This cold extreme in New Zealand was the aftermath of a major snowfall that occurred just prior to the cold event on 10/11 July 1903. After the snow, an extended cold event occurred that was significant because of the length of time it lasted, its severity, and also how widespread it was.

A number of vivid newspaper accounts of the severe cold at that time were uncovered and discussed by the WMO committee.

“This investigation demonstrates the need for continued and diligent discovery, evaluation and digitisation of all climate records around the world.  The end result is an even better set of climate data for analysis of important global and regional questions involving climate variability and change,” said Professor Randall Cerveny, chief Rapporteur of Climate and Weather extremes for the WMO. 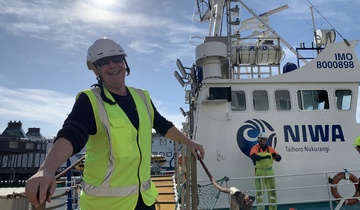