Large sets of high-frequency flow data and suspended sediment concentration (proxied from turbidity data) permit analyses to understand how catchment characteristics (size, land cover and lithology) induce variation in the timing of suspended sediment runoff from catchments during rainstorm events. This, together with ongoing research in NIWA’s Managing Mud Programme, will inform implementation of the government policies (New Zealand Coastal Policy Statement, NZCPS; National Policy Statement for Freshwater Management, NPS-FM) that aim to maintain or improve environmental and cultural values in waterways impacted by sediment and other contaminants. Figure 1 - Turbid water in the Oreti River, Southland, during a November 2018 flood.

Existing time-series data of flow and suspended sediment concentration (SSC) derived from calibrated turbidity monitoring were compiled from 17 catchments with different size, climate, land cover and soil type (Figure 2).  North Island catchments included Weiti and WestHoe on the Northeast coast, Hoteo, Waiwhiu and Waiteitei on the Northwest coast, Horokiri, Porirua, and Pauatahanui catchments on the Southwest coast, and Whareama on the Southeast coast. South Island catchments were Motueka River at Gorge and Woodmans Bend, Motupiko and Wangapeka in the Northwest Nelson area, and Oreti River at Lumsden and Branxholme, Mataura, and Makarewa in Southland.

Relationships between turbidity and SSC were developed at each site off water samples collected manually or with an automatic water sampler (e.g. Figure 3). 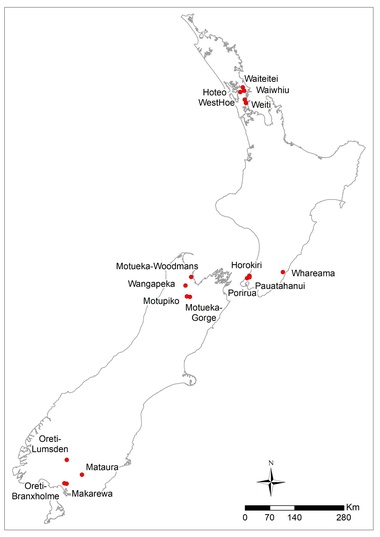 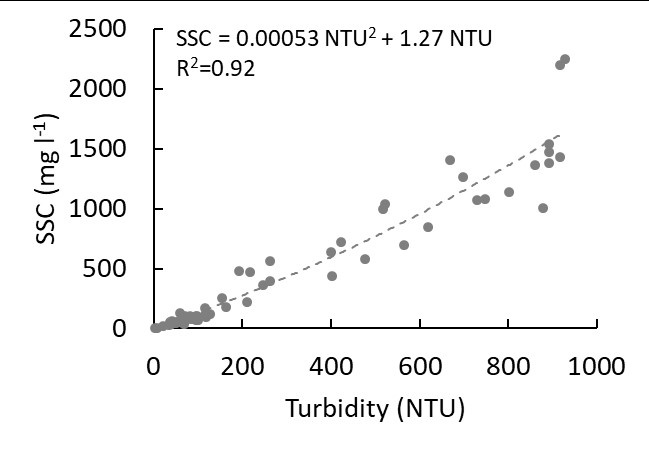 A key finding is that antecedent hydrological conditions and catchment size, land cover and erosion terrain all significantly affect the amount and timing of suspended sediment delivery during runoff events.

For example, considering the proportion of the total event load delivered before and after the peak discharge, sediment loads tend to be evenly split between rising and falling stages in pasture catchments, but forested catchments yield more of their event loads on flood recessions, probably because of delayed erosion (Figure 4). in theory, a higher proportion of the event load carried on recessions in forested catchments should increase the vulnerability of their rivers to fine sediment drapes over their channel beds, with consequent degradation of benthic habitat and fish spawning. However, we also found that forested catchments yielded less sediment overall (on a unit area basis), and that the proportion of sediment load carried late on event recessions was also influenced by the size of the preceding event.

With future work, we plan to compare event-scale sediment transport dynamics with measurements of fine sediment deposition. If this relationship is confirmed, successful river management could focus on control of those catchment sediment sources that supply the load carried on event recessions.

This work has been funded by NIWA’s Managing Mud Programme. Many thanks are due to the Auckland Council, Environment Southland, Greater Wellington Regional Council, and Tasman District Council for providing the data.