Estuaries in New Zealand are experiencing sedimentation at higher rates than before humans arrived here: this represents a loss both for land and estuary productivity. We need to better understand what has been happening so that we can predict the future and fight these losses.

Estuaries follow similar evolutionary pathways: they fill with sediment, subtidal areas (areas below low tide) and water depths decrease, and the influence of freshwater runoff and sediment inputs changes over time. Although estuary sedimentation is a natural process, sedimentation rates are now an order of magnitude higher than before human activities – especially deforestation, the subsequent development of agricultural land use and, more recently, urban development – disturbed the natural landscape.

In New Zealand estuaries, rapid environmental changes associated with deforestation have occurred only relatively recently, following the arrival of people from about 700 years ago. Major changes include shifts from sandy to muddy bottom sediment, which are characterised by less diverse plant and animal communities, and which are less able to tolerate the increased deposition of mud. In some estuaries, these changes have occurred gradually over many decades, and they are not necessarily perceived by individual generations.

Accelerated estuary sedimentation represents the loss of tens of millions of tonnes of topsoil annually from the land, and with it the basis of New Zealand's agricultural productivity. Soils have taken thousands of years to form and are not easily replaced. At the same time, the effects in estuaries are felt as the loss of fish and shellfish resources and on-going costs associated with maintenance of navigation channels.

Sediment cores taken from estuaries in environments where this deposition occurs – such as subtidal basins, intertidal flats (the area between low and high tide), tidal creeks and mangrove forests – represent a record through time of natural processes and human activities. We need to unlock this information from cores in order to understand the past, and so help us predict the future.

We use large-diameter (10 cm) Livingston piston corers and gravity corers (Fig 1.) to collect intact sediment cores up to several metres long. Gravity corers are used for surface samples; piston corers can be used to sample in deeper water.

Cores are collected in a diverse range of environments, from mangrove forests in sheltered creeks to the continental shelf (Fig. 1). In the laboratory, physical characteristics including sediment fabric and sediment particle size are measured using digital X-ray imaging and lasers respectively (Fig. 2). Typically, the core reveals layers of sediments, which have been deposited under different conditions and at different times in the past.

To reconstruct the sedimentation history, we need to reliably date sediment cores; from this, we can also estimate the sediment accumulation rate (SAR). Sediments deposited within the last ~150 years are routinely dated based on the activity profiles of the radioisotopes lead-210 (210Pb, half life 22.3 years) and caesium-137 (137Cs, half life 30 years).

210Pb is a naturally occurring radioisotope that is deposited at the earth's surface from the upper atmosphere. A key assumption of the standard constant-rate-of-supply  210Pb dating method is that 210Pb deposition is constant at time scales of years to decades. The results of monitoring of atmospheric 210Pb deposition over the last decade by NIWA support this assumption.

Radiocarbon (14C) dating of marine shell and terrestrial plant remnants preserved in cores is also used to indirectly date sediments many thousands of years old. The short-lived radioisotope beryllium-7 (7Be, half life 53 days) provides information on the depth of the surface-mixed layer which results from sediment being moved by waves and/or currents, and the activities of animals living on and in the seabed sediments.

Once dated, sediment cores can be used to reconstruct the past environment, and to determine how human activities have changed things. For example, cores taken from Pakuranga estuary, Auckland, have shown how urbanisation of the catchment has increased the SAR by a factor of 10–30 since urbanisation (Swales et al. 2002, Fig. 3).

The Compound Specific Stable Isotope (CSSI) sediment-tracing method has been used to identify contemporary sediment sources. By applying the CSSI method to the layers of sediments preserved in cores, we can now determine how sediment sources have changed over time.

NIWA has developed an extensive data set of sediment accumulation rates based on 85 cores collected from North Island estuaries and coastal bays over the last ~15 years. The data are based on consistent dating methods, "comparing apples with apples", and enable valid comparisons to be drawn between habitat types and estuaries.

The results, based on 210Pb dating, show that over the last 150 years estuaries with relatively large catchments and/or small sediment accommodation space (the unfilled volume of an estuary below high tide) have filled with sediment most rapidly, with sediment accumulation rates reaching 25 mm/yr in tidal creeks. Expressed as estuary-average values, Auckland's largely intertidal east-coast estuaries and Kaipara Harbour have accumulation rates averaging ~5 mm/yr, which is substantially higher than in the Bay of Islands and in Pauatahanui Inlet (Porirua), where the average accumulation rate is < 2.5 mm/yr.

Although these numbers might seem small, New Zealand estuaries are now filling with catchment sediments ten times faster than before large-scale deforestation of catchments. For example, annual sediment deposition in the Bay of Islands has averaged ~500,000 tonnes per year over the last century, which compares with less than 50,000 tonnes per year since the bays were formed ten thousand years ago by rising sea levels.

For the first time, CSSI dating of sediment cores provides new insights into how the sources of catchment sediments have shifted from natural to anthropogenic over the last several thousand years.

The environmental record preserved in sediment cores in the Bay of Islands shows that natural disturbance of the landscape occurred thousands of years before humans arrived. This is indicated by the presence of bracken-labelled soils in prehistoric estuarine sediments; bracken typically colonises areas which have been deforested by landslides and/or fire. Over the last hundred years, soils eroded from agricultural and horticultural land  have increasingly dominated sedimentation, not only in the estuaries but also in the Bay of Islands and beyond to the inner continental shelf. For example, at a core site in the inner Bay of Islands (water depth 30 m), most of the soil deposited since the early 1960s has been derived from dry-stock (i.e. sheep and beef) pasture.

This new, innovative approach to environmental reconstruction based on sediment cores allows us to measure how various soil sources change over time. This, in turn, will allow resource managers to target catchment management and restoration efforts more effectively in estuaries and coastal waters.

This work has been funded by Auckland Council, Northland Regional Council, Land Information New Zealand and the Foundation for Research, Science and Technology (Effects-Based Protection and Management of Aquatic Ecosystems, C01X0307). 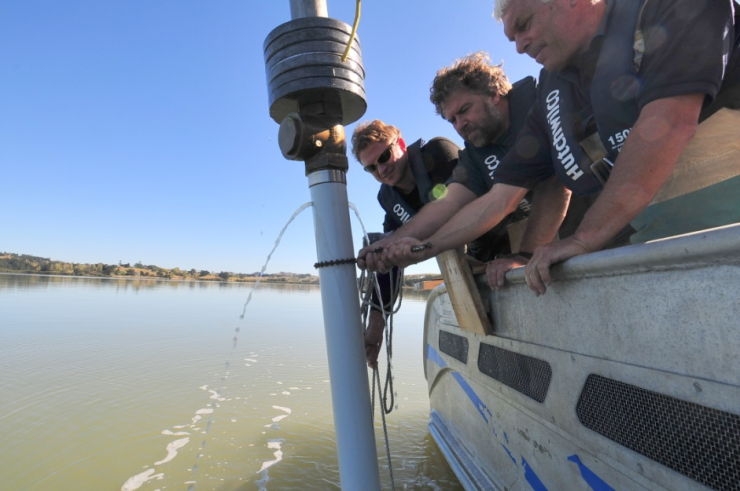 Fig 1: NIWA scientists collecting sediment cores in the Kaipara Harbour using a gravity corer (March 2010). The spatial patterns and rates of sedimentation in the harbour over the last 150 years were determined from detailed analysis of these sediment cores. Credit: Rod Budd

Fig 2: Digital X-ray imaging of dated sediment cores reveals the fine details of the sedimentary record. Higher-density objects such as carbonate shells (20-cm depth) and sand layers appear white in this image; lower-density fluid/fine-grained muds show as darker layers. This core was collected from an intertidal flat and shows fine layers of sediment (made up of muds and sands) below 75-cm depth that were produced by regular changes in sediment transport rate and/or sediment supply. 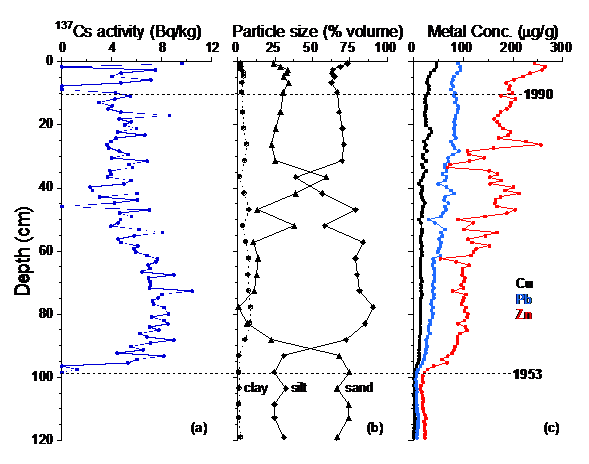 Fig 3: Record of rapid catchment urbanisation preserved in estuarine sediments, Pakuranga Creek, Auckland. The first appearance of 137Cs at 98 cm depth dates this sediment horizon to the early 1950s (Fig 3a). Average sediment accumulation rates of 26 mm/yr during this urbanisation phase increased ~30 fold over pre-deforestation values of less than 1 mm/yr. The onset of catchment urbanisation in 1960 coincides with the transition from sand to mud (i.e., clay and silt) deposition at 90 cm depth (Fig. 3b). Concentrations of copper, lead and zinc also start to increase above background values at this time (Fig. 3c). These high-resolution sedimentation records are particularly valuable for developing our understanding of how human activities on the land impact estuarine and coastal receiving environments (Source: Swales et al., 2002).