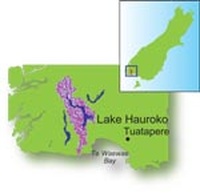 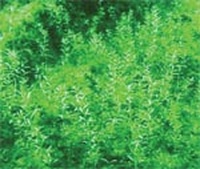 The absence of exotic oxygen weed allows the native Callitriche petriei to form extensive cover to depths of several metres in some locations.

Salmonids are one of the few introductions to Lake Hauroko. Lake Hauroko contains some of the best examples of freshwater sponges in New Zealand. A mixture of native species at a depth of 3 m. The dominant plants here are Isoetes alpinus, Myriophyllum triphyllum, and Potamogeton cheesemanii. Native bullies among shallow rocks and plants. These fish take refuge from predators in this part of the lake, and feed on small insect larvae.

Ask New Zealanders which is the deepest lake in the country, and most will opt for the North or South Island icons Taupo, Wakatipu, or perhaps Te Anau. But at 462 m deep, Fiordland’s Lake Hauroko beats them all, and is one of the world’s ten deepest lakes. Hauroko (meaning sound of the wind) lies in a deeply incised glacial valley along which winds are funnelled, making it a hazardous place for small boats. Beech forest clings to the steep valley sides that shut out most of the sky, and spectacular waterfalls plunge into the steep-sided lake. The beech forest gives a dark humic stain to the water that drains it, and so Lake Hauroko is very dark. The humic stain means that light is attenuated rapidly with water depth, and plants are restricted to the upper 10 m of the lake – it is too dark below this. Within this 10 m band of vegetation, however, Hauroko packs an impressive and important range of aquatic plants, with few exotic species as yet.

Lake Hauroko lies just within the southeast boundary of Fiordland National Park and is protected by swarms of sandflies and inhospitable terrain. Road access to the lake opened in the 1960s, and this previously remote area has become a popular adventure tourism destination. In particular, the Wairaurahiri River, which drains the lake, offers outstanding kayaking and jetboating. Because of its past isolation, it may be no coincidence that exotic species are still rare in the Hauroko aquatic flora. This contrasts with the nearby Lakes Manapouri and Wakatipu, where the invasive oxygen weed Elodea canadensis has spread, restricting native species to locations where Elodea cannot grow. Instead, the native flora of Hauroko remains rich and varied, with spectacular submerged growths of otherwise infrequently encountered species such as Nitella stuartii, Callitriche petriei, extensive beds of the quillwort Isoetes kirkii, the aquatic fern Pilularia novaezelandiae, and tall and short native angiosperms, including one of our rarities, Hydatella inconspicua.

The spectacular setting of Lake Hauroko – deep, dark water under towering, bush-clad hills – makes it easy to view it as part of an ancient world. Indeed, as far as aquatic plants go, Lake Hauroko is a window on the pre-Pakeha past, when New Zealand lakes were free of exotic plant species. It is easy to forget that submerged plants are even more vulnerable to invasive species than their terrestrial counterparts, and that there are so few undegraded large systems left in New Zealand. Lake Hauroko is a valuable part of the aquatic plant conservation estate. Will increasing activity in southern Fiordland allow it to remain so?