The origin of Didymo

The mat-forming freshwater diatom Didymosphenia geminata (or ‘didymo’) is now a familiar and unwelcome feature of many South Island rivers. 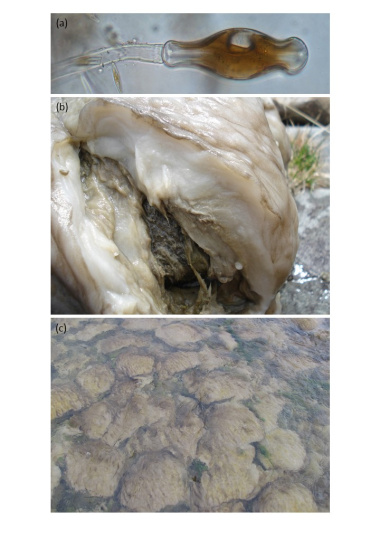 Photos showing Didymo in all its guises. a) Cell of Didymosphenia geminata, with stalk (cell approx. 130 μm long). (b) D. geminata mat cut open to show the thick mass of white stalk material with a thin layer of cells at the surface. (c) High cover of a riverbed by D. geminata mats.

In New Zealand, it is generally accepted that didymo is an introduced organism, arriving around 2004. However, not everyone in the international scientific community accepts that.

Recent publications suggested that environmental change drove the worldwide expansion of didymo blooms, and that didymo – like many diatoms – was already cosmopolitan. It is hard to counter this argument because it is virtually impossible to prove absence prior to reports of blooms. In a recently published paper, we used data from the National River Water Quality Monitoring Network – which goes back to 1989 – to show that conditions in currently affected rivers were suitable for didymo blooms well before first reports of blooms in 2004. This evidence, combined with new molecular data, makes a strong case for the proposal that didymo was indeed introduced to New Zealand recently. The molecular analyses – carried out by Landcare Research – showed that the didymo strain in New Zealand is identical to strains in Colorado, USA, and Vancouver Island, Canada (but not to strains from other locations), consistent with a western North American origin for this invader.

The origin of Didymo