Inanga (Galaxias maculatus) is an amphidromous galaxiid that usually spends its larval life in the marine environment and adult life in freshwater.

The inward migrations of inanga post-larvae back to freshwaters occurs primarily in late winter and spring time where they are targeted as part of the whitebait fishery. A bucket of post-larval whitebait that have just migrated from the marine environment into the river.

Previous work has shown that body size, age, condition and growth rates of inanga post-larvae, along with migration timing, show strong linkages with larval hatch dates. In this study, we hypothesized that adult inanga may grow at different rates in freshwater depending on larval hatch dates and subsequent timing of post-larval movement into freshwater. Potential differences in growth rates during the adult freshwater phase may have consequences for population dynamics of this species, particularly size and age at maturation, as well as reproductive investment. The interlinkages between growth and reproductive traits will improve understanding of this species complex life cycle and better inform strategies to protect declining populations.

First, the growth histories of adult inanga were derived from measurements of incremental distances between daily rings. Then, age and hatch dates were estimated. 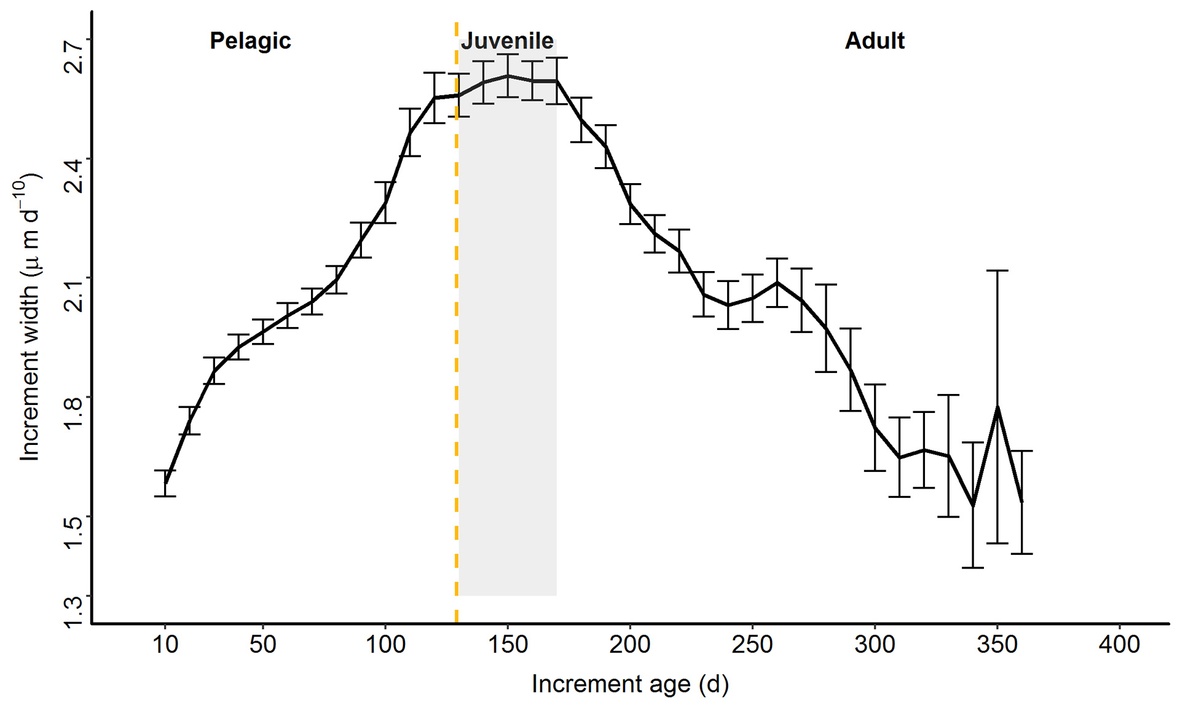 The mean growth trajectory of adult inanga is shown (± SE) and the demarcation between pelagic and adult growth illustrated. The orange dashed line represented the average age at inward migration of inanga post-larvae in the Golden Bay region.

Age-dependent growth rates during marine and freshwater life of autumn, winter and spring-hatched inanga. Partial effects plots from the GAMMs for fitted smoothers of age-dependent growth rates among hatch-seasons. The estimated degrees of freedom (EDF) are shown on the y-axis. The dashed line is the model intercept and the grey shaded lines are the 95% confidence intervals of the predicted smoothers. Note the varying scales on the x-axes.

Despite larval marine and adult freshwater growth trajectories differing among larval hatching times, no differences in body size at sexual maturity were found. Furthermore, although winter- and spring-hatched inanga were significantly younger at sexual maturity than autumn-hatched fish, reproductive investment (GSI) did not show any significant differences among larval hatching times.

These results shed light on the relationships between growth attained in pelagic and freshwater environments. We suggest that inanga are an incredibly flexible species and their growth rates can be maximized in marine and freshwater environments. This enables them to acquire an optimal body size to maximize reproductive investment which is a key life history strategy underpinning this species population dynamics. Future studies will incorporate environmental conditions in freshwater (e.g. temperature, flow variability) to examine how environmental variation impacts inanga growth rates.