Rainfall in many irrigated regions of NZ is uniformly distributed (in time) and, theoretically, irrigations could be scheduled based around forecast rainfall. However, in the absence of easy access to reliable rainfall forecast information, farmers seldom irrigate based upon forecast, often irrigating right before significant rainfall events, resulting in the loss of water and nutrients from the root-zone, either by drainage and leaching, or via overland flow.

With funding from NIWA’s Freshwater and Estuaries Centre and MBIE, in 2012 we launched a pilot study in a river-based irrigation scheme north of Christchurch, investigating the use of short-term (2-15 days) weather forecasts for irrigation. Through the project, we provided a selection of farmers from the Waimakariri Irrigation Scheme (WIS), with measured rainfall, soil moisture, soil temperature, drainage and estimated evaporation, and with 2-, 6- and 15-day forecast rainfall and other weather parameters. The data were sent by email every day, as an easy-to-read graphical plot. Farmers were also provided with a mobile App for easy access to the information and data. Based on current farm (soil) conditions and forecast weather, farmers are able to make an informed decision on irrigation timing as well as nutrient application. Figure 1. Climatic and soils gradients across the Waimakariri Irrigation Scheme. Dairy 1-4 and Crop are the pilot farms used in the study. [Map source: Google]

There is a significant climatic (specifically rainfall and evaporation) and soil drainage gradient across the WIS area (see Figure 1). During irrigation seasons, the northwest region (region around Dairy 1 in Figure 1) may receive as much as 130 mm more rainfall than the southeast (region around Dairy 4). These gradients influence the irrigation demand and management across the scheme. For example, the light soils closer to the river may need more frequent irrigation, but less irrigation depth per event, than the soils far from the river. Co-innovation is a non-linear, multi-directional, multi-layered process of addressing complex issues. Water management is one such complex issue that involves multiple stakeholders, interests, and users. The design, development and dissemination of biophysical tools and solutions for improved water management need to consider the interactions between stakeholders, and thus need to apply approaches, such as co-innovation and co-learning, that will assist in developing understanding and solving the problem (see Figure 2, adopted from Srinivasan et al., 2017)

The drivers and barriers to improved irrigation management are discussed in Srinivasan and Elley (2017). In summary, the ability of farmers to practice irrigation efficiently relies on several factors, many of which are beyond the farm. Factors include, the availability of suitable irrigation infrastructure, access to a reliable water supply, knowledge of soil properties, crop irrigation demands, and access to a reliable weather forecast. At the level of the irrigation scheme, the efficiency of on-farm irrigations can be influenced by environmental limits placed on nutrient and water use, and the ability of schemes to reliably reticulate water to meet demands.

At the catchment and regional scales, planned water quantity and quality limits on resource use dictated irrigation practices. At regional and national scales, public perception towards irrigation and demands from competing users, including from those expanding irrigation, influence irrigation practices. Going from the farm to national scale, the diversity of viewpoints increases as does the number of stakeholders.  In essence, irrigation decisions and investments are made on-farm, but are informed and constrained by the wider system in which they fit. Hence, to be successful, on-farm irrigation solutions must encompass the wider system along with the constraints and opportunities it presents.

Based on our learnings from this study, we have successfully applied for MBIE funding to further explore the economic benefits of improved irrigation management practices using weather forecast. The new MBIE programme, Justified Irrigation, began in October 2016. It investigates the productivity losses/gains from poorly managed irrigations. We hypothesise that improved irrigation practices will bring better economic returns to farms. Additional material on the project and its findings 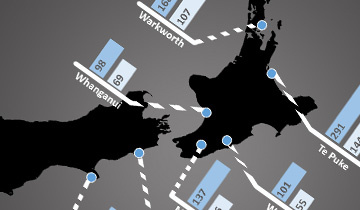