The NINO3.4 Index (in the central Pacific) for the month of September (to the 29th) was equal to the 1981-2010 climatological value (i.e. zero anomaly). Above average warmth continued in the NINO4 region (west-central Pacific) with a monthly anomaly of +0.65˚C. The NINO 1+2 Index continued to cool during September with a monthly anomaly of -0.58˚C (near the La Niña threshold).

Upper-oceanic heat content anomalies continued to decrease in the eastern and east-central equatorial Pacific. Meanwhile, the core of the warm pool of water than had been associated with El Niño-Modoki conditions earlier in 2019 was located just west of the International Dateline during September. While this spatial pattern reflects ENSO neutral conditions, the atmosphere may respond to the growing coolness in the eastern equatorial Pacific during the next season or two.

Across the global tropics, rainfall patterns were consistent with ENSO neutral conditions. For the first month in quite a while, below normal rainfall occurred near the International Dateline. The most dominant tropical signal occurred across the eastern Indian Ocean and Indonesia, where rainfall and cloud cover was well below normal. This was consistent with a strongly positive Indian Ocean Dipole (IOD) pattern, where sea-surface temperatures are above average in the western Indian Ocean and correspondingly below average in the east near Sumatra (hence the term “dipole”). A positive IOD is associated with drought in Indonesia and southeast Australia.

When the IOD begins to influence the Walker Circulation, as it did during September, it can have flow-on impacts for areas outside the tropics, including New Zealand. Historically, a strongly positive IOD has been associated with a transition from dry to wet conditions about the western South Island during November due to an increase in westerly winds. Temperatures, historically, hedge in the cooler direction for the October-December period when the IOD is strongly positive.

New Zealand’s coastal water temperatures continued to cool during September 2019. SST anomalies are now below zero for all six climate regions of NZ for the first time since January 2017. SSTs in the Southwest Pacific are close to average except east of the International Dateline where slightly above average warmth persists. Near or below average regional SSTs are forecast to continue through the next season, particularly near New Zealand and in the Tasman Sea. 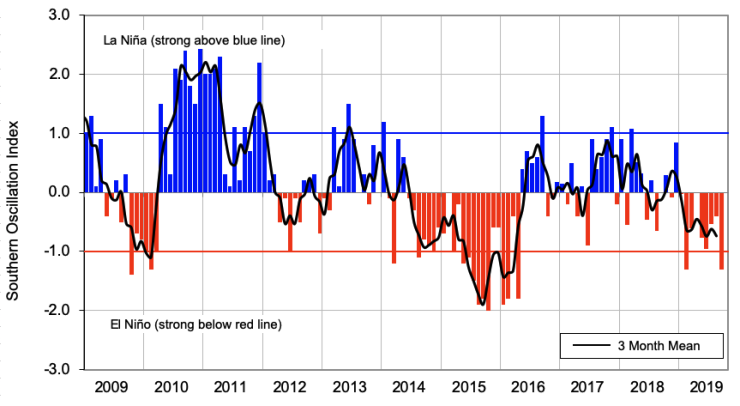