Determining impacts on marine ecosystems: the concept of key species When one marine animal has a large influence on other parts of its ecosystem, we call it a key species. These animals can be very useful in monitoring programmes.

One of the goals of marine ecology is to detect and assess the scale of human effects – such as scallop dredging, heavy metal contamination or increasing turbidity – on marine ecosystems. In these complex systems, making simple predictions can be difficult in all but the most catastrophic circumstances and the search for a quick, foolproof solution for measuring the effects of human impacts has been going on since the 1960s.

The best information on ecological changes over time comes from research and long-term monitoring programmes that sample the wide range of organisms that make up the marine community. Using indicator and key species in conjunction with these broad-scale methods adds weight to our predictions and offers a way to reduce costs and time. What are the differences between these two categories of species? And what makes key species so useful in monitoring programmes?

Indicator species change their behaviour, abundance and/or physiology in response to stresses in their environment. Criteria for selecting indicator species will depend on the reason for monitoring. For example, we might want to detect short-term behavioural/physiological responses like the change in the rate of bivalve shell-gaping in response to temperature. Or we might be interested in longer-term chronic effects, like oyster shell deformation.

Many indicator species are chosen on the basis that they are relatively abundant and widespread, so they are easy to sample and are tolerant of a wide variety of environmental conditions.

An important advantage of using indicator species is that extensive research has been done on their responses to certain conditions. For example, they may provide accurate information about the levels of contaminants in an area. A major disadvantage is that they tell us nothing about the potential for impacts on other species or parts of the ecosystem. Indicator species are also not so useful for monitoring disturbance-type impacts, for example, dredging, dumping and changes in water flows. 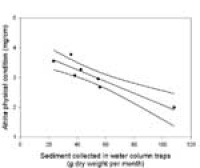 Graph showing the condition of the horse mussel, Atrina, at different concentrations of suspended sediment. 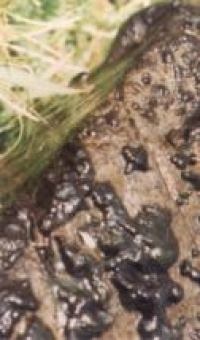 Key species are not linked to the detection of impacts but to understanding ecological processes. Key species are those that either directly or indirectly modify other parts of the community, as in the following examples.

In general, it seems practical to monitor key species because if they decrease in abundance, size or activity, the rest of the ecosystem will change. For this reason key species can be used not only to monitor impacts, but also to manage ecosystems and to predict effects.

In order to be able to manage and predict, we need to know a lot more about key species than that they affect the organisms around them. We need to know how sensitive they are to various changes in their environment and we need to study their population fluctuations over time. With research, it is possible to turn a key species into an indicator species, combining the advantages of both. This is being done both in New Zealand and overseas.

In New Zealand the horse mussel, Atrina zealandica, is a good example of a key species that has potential as an indicator. Atrina filter their food out of the water column and can remove up to 80% of small particles from the water in the process, affecting phytoplankton concentrations and water clarity. They protrude from the sea floor and this affects how sediment is carried around and settles out on the sea bed. In turn, this affects the structure and diversity of animals living near the sea floor.

Atrina are sensitive to increased sediment suspended in the water column and transplant experiments have shown there is a direct relationship between increasing sediment concentrations in the water column and decreasing Atrina condition (where condition refers to the size and weight of these shellfish). Thus Atrina have the potential to offer a reliable and cost-efficient way to monitor increasing sediment loading in estuaries (see Ellis et al. 2002).

Our research into using key species to complement community-scale monitoring involves two phases. First we determine the role of a species, and identify how it affects the rest of the ecosystem. Then we investigate the responses of the key species to various changes in the environment.

Already we are using key species as indicators for a variety of environmental changes in long-term monitoring programmes. This is particularly valuable and is helping us to improve our understanding of changing ecological processes so that we can manage habitats and predict changes with greater confidence.

Teachers: this article can be used for Biology L8 A.O. 8.1a. See other curriculum connections at www.niwa.co.nz/pubs/wa/resources

Pip Nicholls is based at NIWA in Hamilton.

Research on key species is undertaken in NIWA’s FRST-funded programmes: “Effects of Sediment on Estuarine and Coastal Ecosystems” and “Fishing: Ecosystem Effects and Resource Sustainability”.