Supercharging the view from above 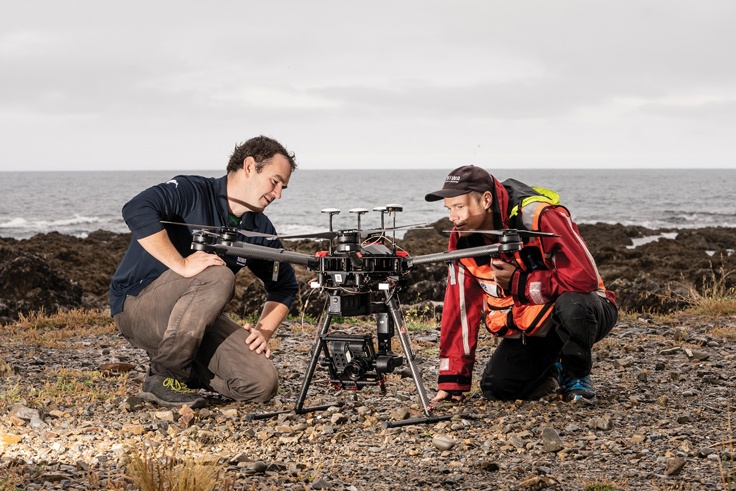 At low tide on a drizzly morning at Wellington’s Taputeranga Marine Reserve, environmental monitoring technician Hamish Sutton clambers among rocks looking for the best place to set up his GPS tripod.

When the rain clears, Sutton unboxes a big black drone and launches it on a pre-programmed flight over 20 hectares of shallow reef. The area below is home to an abundance of sea creatures and underwater plants, including nearly 400 species of seaweed.

A multispectral camera that registers colours invisible to the human eye hangs from the bottom of the drone. With six lenses, it lights the seaweed up like a Christmas tree, taking a high-resolution photo every two seconds.

There’s a long way to go, but these initial photos are the first step towards creating a detailed digitally-enhanced overview of Taputeranga’s tidal seaweed forests.

Untroubled by a flock of territorial gulls, the drone continues down its pre-ordained path.

Reaching the end of a line, the machine stops in mid-air and automatically pivots for its next run. Sutton lands the machine for battery changes, data card switch-outs and rain interruptions. The rubber mats play an important role in ‘ground truthing’ the 30,000 images the camera will take. Being able to relate the images to real features on the ground makes things easier when it comes to digitally “stitching” the photos together into 2D or 3D models. After the stitching is complete, Tait will run the images through powerful computer software – software he’s trained to automatically identify the precise type of seaweed it sees.

It is this advanced machine learning capability that means Tait can turn the drone images into a comprehensive bird’s-eye view of the reserve’s seaweed stocks.

It’s important work. By providing nutrients and shelter for animals and absorbing carbon emissions, seaweed plays a major role in sustaining marine ecosystems and in buffering our warming climate. We all need to know whether our seaweed is doing OK. This survey is being conducted for the Department of Conservation (DOC). DOC will use the information in a report card on the state of our marine reserves – helping to chart the health of these vital seaweed forests over time.

Where once researchers like Tait could only observe from above using expensive aircraft or satellites, drones now enable scientists to transform the scope and scale of their work.

The small, remote-controlled units are easily deployed and can quickly survey large, hard-to-access areas. Plus, repeated flights can help illuminate changes over time that might otherwise go unnoticed.

That package of drones and digital science is now opening up a whole new array of research opportunities. Christchurch-based Sutton has been flying drones at NIWA for three years. He’s one of many drone pilots across the organisation who have passed advanced flight training courses approved by the Civil Aviation Authority. The main goal when operating these expensive flying machines, he says, is “don’t crash”. It’s a lesson that has come from hard experience – and even harder landings.

Late last year, Sutton took the controls for a research project in the Canterbury high country. At Lake Tennyson, north of Hanmer Springs, boulders studded into moraines (material left behind by moving glaciers) are giving NIWA principal scientist Dr Andrew Lorrey and colleagues from Victoria University of Wellington and the University of Maine, vital clues about the glaciers that dominated the landscape tens of thousands of years ago. The fluctuation of glaciers and ice sheets – past and present – reflects their sensitivity to climate. Thanks to topographic data gleaned from the whirring drone, 4D glacier models put together by Lorrey and colleagues are revealing what the temperature changes were like when much larger glaciers underwent a rapid retreat.

With much of the terrain covered in dense tussock, it’s been tricky up until now to define the moraines and know where the best Lake Tennyson boulder samples can be found. Enter drone-mounted LiDAR technology, which Lorrey likens to “x-ray vision”. LiDAR is a remote sensing method that can generate ultra-precise, 3D elevation maps of ground features.

“It’s not terribly clear, in some cases, what’s going on in a landscape like this because vegetation gets in the way and the landforms we’re looking for are very subtle,” says Lorrey.

“We see through all that with the drone’s LiDAR, using it to strategically target where to take our field samples. Now, we can look at the GPS coordinates of samples we’ve already taken and figure out where the gaps are – where we need to sample next.”

Sutton’s three-hour drone flight at Lake Tennyson captured a staggering one billion LiDAR data points, which were processed back at NIWA’s Christchurch lab and turned into a detailed map. This map lets Lorrey and colleagues analyse the old glacial landforms at footprint scale, defining glacier timelines in the landscape and locating boulder samples on them with pinpoint accuracy At first glance, the sleek aquatic drone looks like the kind of thing that would delight small children. But this is no toy – the technology is integral to developing new techniques for detecting the introduced weeds that plague our lakes and rivers.

Invasive aquatic weeds are a major problem in many New Zealand waterways. They outcompete native species, play havoc with our irrigation and hydropower infrastructure, and severely compromise cultural and recreational values. Early detection is the key to effective control.

Working with NIWA’s Instrument Systems and Marine Biosecurity groups, Clements and his team are developing algorithms for a new underwater detection system. Video imagery and hydroacoustic data, captured by sensors as the boat skims over the surface of the water, are combined with an artificial intelligence technology known as ‘deep learning'. This digital advance enables computer software to ‘search’ the video frame by frame for target species – tagging GPS coordinates as it goes.

The aquatic drone also collects information about bathymetry, sediment and vegetation abundance, resulting in a rapid and cost-effective detection and mapping tool that can be effectively used over large areas.

The trial is in its early stages, and Clements readily acknowledges that human dive surveys will always play a role in this work. But, drawing parallels with New Zealand’s Covid-19 response, he says the technology offers huge potential.

“Eradicating a freshwater invasive weed by detecting it early is much more feasible and cost-effective than dealing with a widespread incursion in the long term.” NIWA’s drone capability extends well below the waterline. As well as tracking weeds and sediment flows, remote or autonomous vehicles are used, among other things, to assess the health of scallop populations, map ocean currents and measure coastal water quality and algal blooms.

The vehicle is tethered to a surface ship by cable and “flown” by Tait using the sensors and high definition cameras it carries.

Operating out of sight on the Antarctic seafloor brings its own set of problems. But high-speed fibre optic cables have brought a new era of data transfer back to the mother ship, and Tait believes we’re at the start of an explosion of advanced marine ROV use.

“We’re now beginning to take what we’ve learnt from using technology on aerial drones and are fitting out similar, miniaturised systems for underwater use.”

Among the rich diversity of Ross Sea life, the recent survey uncovered surprisingly deep and dense stands of large kelp, raising interesting questions about their role in the Antarctic marine carbon cycle.

“It really opens up a whole new field of research in how those plants are taking CO2 out of the atmosphere and storing that in the deep cold sea. We really know very little about that.”

Tait is already planning how he can get his ROV back down to the Ross Sea to uncover some of the answers.

With the advances in technology matched by the relentless march of computer science, expect to see a lot more drone activity in our skies, lakes and distant oceans in the years ahead.