NIWA is working alongside Māori to develop gateways to science and technology partnerships that are helping grow the Māori economy.

For NIWA scientists two days spent on a course at Raglan recently ended up being as personally rewarding as it was professional. At Raglan’s Poihakena Marae, 26 staff were immersed in tikanga Māori, learning protocol, history and values that have added a depth of understanding that was previously elusive.

The course was run by the Te Kūwaha team, NIWA’s 12-strong Māori environmental research group, with the aim of showing colleagues that a better understanding of the Māori world is not only an asset, but essential. The scientists learned how to introduce themselves in Māori, including the reasoning behind the importance of including where they came from, and the value placed on personal connections, especially in business. The course, said one participant, gave him a far greater understanding of where Māori were coming from and why they saw the world differently, and he now felt far more confident meeting groups he needed to deal with in his job. Marino Tahi, who took over as manager of Te Kūwaha about 12 months ago, should allow himself a moment or two’s satisfaction that the noho marae course was so well received. But he is the first to acknowledge there is a long journey ahead. Right now, Te Kūwaha is in a rebuilding phase. Since Tahi joined NIWA—after a decade as Māori partnerships manager at Landcare Research—he has embarked on a carefully planned strategic mission aimed at ensuring NIWA is properly positioned to work alongside Māori organisations as they build their assets, expertise and profit margins.

“Māoridom is very sophisticated these days,” he says.

“NIWA is not the only game in town and we need to have scientists that straddle the Māori and Pakeha world. If Māori want a science provider, they need one that can understand their aspirations and work in partnership to bring knowledge systems together.”

Understanding how the Māori economy works is fundamental to how well NIWA succeeds in this area.

In other words, and as spelt out in a 2013 Te Puni Kōkiri report, the Māori economy is a significant and increasingly important contributor to the New Zealand economy. That report put its total value at $42.6 billion, up from $36.9 billion in 2010.

Chris McKenzie can reel off these figures without pause. He has been NIWA’s Māori economy expert for about six months. A former political strategist for Māori Party leaders Tariana Turia and Te Ururoa Flavell, he was also chairman of central North Island iwi Raukawa, and has led treaty claim negotiations and built commercial companies.

He is also a gifted orator. At the noho marae course at Raglan, he had his audience spellbound as he told them the history of his tribe, Ngati Raukawa, their Treaty of Waitangi claims and settlement and subsequent economic development. He says New Zealand is now witnessing a maturity within Māori enterprises in which land is more productive, businesses are turning a profit and growth rates are outstripping other organisations.

“Gone are the days when Māori organisations owned one farm. Most trusts now own three to five farms and are growing all the time—so we only do big now and we’re very collaborative.”

McKenzie acknowledges there are challenges working with Māori organisations, particularly in bridging the cultural divide, but he believes NIWA is well placed as long as it looks beyond one-off small projects and sees the value in working collectively.

Tahi also acknowledges the sophistication of Māori business, but cautions that NIWA is not the only player. “We have to define our point of difference in the Māori space.”

Both men are keenly aware that growth in the Māori economy presents huge opportunities for NIWA.

“Every year as the tribal financial asset bases grow, some of that money is going into environmental projects. My point is that while Māoridom is a small part of the economy, the work they are doing is increasingly in an area where NIWA has expertise,” McKenzie says.

Fishing, farming and aquaculture offer huge potential for Māori; significant money has been invested by iwi and other Māori entities and is now at the stage where science and technology is needed to boost the level of productivity.

But what sounds like a perfect fit isn’t quite that easy. McKenzie says Māori don’t tend to shop around for support and will try to build capability internally where they can. He points out that a collective of Māori fishing companies frequently sends young Māori scientists to train in Japan. That is partly why Tahi’s strategy for Te Kūwaha places heavy emphasis on strengthening the quality of NIWA’s relationships with Māori to ensure the work it does is “transformational rather than transactional.”

“It’s in the name itself,” says Tahi. “It translates as ‘the gateway’ or portal—NIWA’s portal into the Māori world. The reality is that Te Kūwaha relies on the wider organisation and its capabilities and likewise, the organisation relies on Te Kūwaha to achieve some of the Māori objectives in research programmes.”

Te Kūwaha, along with iwi, share the values of kotahitanga (partnership), manaakitanga (caring, hospitality), whānaungatanga (fostering relationships) and kaitiakitanga (stewardship or guardianship of the environment).

The team, comprising programme leaders, researchers and support managers, leads Māori-centred research and its science staff also contribute to mainstream scientific research. Tahi says the team members see themselves as specialists who know how their audience operates and thinks.

“In the commercial sector NIWA has a strong presence, but in the tribal sector there are definite advantages to having a Māori shop window within the NIWA range of products.”

Te Kūwaha’s top priorities are strengthening relationships, building capability within the team, particularly in marine science, and enhancing bicultural development within NIWA. He has ambitious plans for the group, wanting to expand it to about 40 people, with a strong succession plan in place. McKenzie also says there is a need for “expert navigators” who can steer the organisation through the Māori business environment.

“What is important for NIWA is not to get a navigator in when it’s near crisis point. I think that ensuring everybody understands the specific needs of tribes is an issue with science in general. Strangely enough, although many entities are trying to make a dollar, sometimes that is not the overall priority.

“NIWA has a tendency for social good, good environmental outcomes and to an extent, commercial outcomes, but aligning the values correctly with Māori entities goes a long, long way I think.

“NIWA people are the absolute experts in their area, but if you go to see a Māori organisation you can’t just go as the expert, you have to go open enough to understand where the organisation is going.

“If you crack that code you will enjoy a long-lasting and loyal relationship as they grow.” 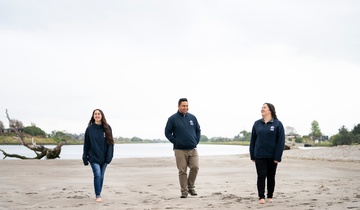