New Zealanders and Pacific Island communities are on their way to having the most advanced tsunami monitoring system in the world, thanks to a huge project that has required equal measures of collaboration and technical expertise. The detection buoys will ensure early warning of tsunami generated along the Kermadec Trench or north west of New Zealand.

The project is led by the National Emergency Management Agency and involves a range of organisations, including the Ministry of Foreign Affairs and Trade, GNS Science and NIWA.

To date, NIWA has assembled and deployed 8 out of an eventual network of 12 purpose-built tsunami detection buoys in the waters off New Zealand and north into the Pacific.

“This will be the first time that we have a network of DART buoys close enough to New Zealand to give us advanced warning as to whether a tsunami is an hour away or many hours away,” says Sarah Stuart-Black, director of Civil Defence and Emergency Management.

But it’s not just a matter of buying some buoys and dropping them into the ocean. Ensuring they are assembled correctly, working faultlessly and go in exactly the right place has been the responsibility of a NIWA team led by oceanographic engineer Mike Brewer.

The DART buoys are fourth generation technology, manufactured in the US, and they arrive at NIWA in pieces. Brewer describes the assembly as “much like a giant Lego set”. “You put everything together and then put the units through some rigorous testing, so that when they’re deployed, we have complete faith in the system.”

Each buoy comprises two main components – a Bottom Pressure Recorder (BPR) that sits on the sea floor, and a large, yellow float on the surface above.

Deploying both components requires a sophisticated mix of precision positioning on the high seas, sophisticated marine mapping below and a deep understanding of ocean currents. NIWA’s flagship research vessel Tangaroa and Brewer’s deployment team onboard are fully equipped to deliver.

A bathymetric survey of the seafloor using multibeam echosounders checks to ensure the gradient is less than 5 degrees, with no obstructions to interfere with signals travelling through the ocean.

Current and wave conditions are also assessed. Once the site has been cleared, the two components are lifted off the ship, and their separate moorings are carefully positioned hundreds of metres below.

The BPR and the float communicate with each other through the water column. Every 15 seconds the BPR records the height of the ocean above and sends that information to the surface buoy once an hour. From there the data goes via satellite to the server based at GNS Science’s National Geohazards Monitoring Centre back in Wellington.

“Tsunami are very long period waves, with some having wave lengths of up to an hour,” says Brewer.

“Wind and swell waves are short period waves, so by measuring every 15 seconds we are cutting out those short waves and concentrating on the big differences.” If the BPR records a measurement it thinks is outside normal parameters, it will send a special signal to the surface float.

This is when the system flicks into “event mode” – a trigger that means it will update the GNS server every few minutes rather than once an hour. Event mode can also be triggered remotely if it is suspected that a tsunami may be headed towards the buoy.

The GNS server registers every incoming report, and if a tsunami threat is detected, NEMA steps in to alert communities nationwide using its Emergency Mobile Alert system. Alerts are also sent to our Pacific neighbours through the Pacific Tsunami Warning Centre.

Tangaroa has already successfully carried out two of three deployment trips. The first, in late 2019, stayed closest to New Zealand. The second, last May, ventured north to Tonga and Niue, and later this year Tangaroa heads back towards New Caledonia to deploy the remaining four buoys. NIWA will also maintain the network in the years ahead.

Brewer says the “New Zealand Inc.” approach to establishing the network has been one of the project’s strengths.

“This has been a massive project with one approach which has really helped make it work.” 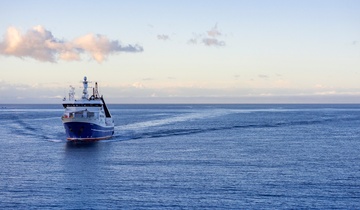