Some commonly-asked questions about tornadoes in New Zealand.

Note: Unless specified otherwise, all mentions of 'tornadoes' refer to tornadoes here in New Zealand.

Tornadoes are relatively rare events here. On average, there are around 7-10* moderate to strong tornado events reported in New Zealand each year.

Fatalities associated with tornadoes are also rare here. The most recent cases are Hobsonville (Auckland) in December 2012 (three deaths), Albany (Auckland) in May 2011 tornado last year (one death), and near Waitara in August 2004 (two deaths).

Q: How often is Auckland affected by tornadoes?

Auckland is hit by a tornado on average less than once per year, but there is a lot of variation from year to year, with some years seeing no tornadoes at all.

Q: Are New Zealand tornadoes similar to the tornadoes which happen in the United States?

Tornadoes here aren't as common or as destructive as those that occur over the plains of the United States.

However, even small-scale tornadoes can cause damage, injury and even deaths. The west coast of the South Island and the North Island coast from Taranaki to Northland have been particularly affected by tornadoes in the past.

Tornadoes here are usually around 20-100m in diameter (wide) and tracks (travel) for just a couple of kilometres. They are extremely localised and the damage is very confined to the tornado itself, although the violent winds can fling debris hundreds of metres away from the tornado and cause considerable damage.

Q: How long do tornadoes in New Zealand last?

A tornado will typically last for a few minutes.

Q: How far do tornadoes travel?

Tornadoes will generally travel across the land for 2 to 5 kilometres.

Note: At the more extreme end, some tornadoes track for over 100 kilometres, are over 1 kilometre wide and have winds up to 480 km/h – such tornadoes are extremely rare, anywhere in the world.

In New Zealand, most tornadoes are associated with pre-frontal squall lines - bands of thunderstorms embedded in a strong, unstable pre-frontal northwesterly flow. The thunderstorms have very strong updrafts and if these occur in an environment in which the wind directions rotate counterclockwise as the air rises, the updraft can start to spin and a mesocyclone can form. Tornadoes are spawned from these mesocyclones, which can be as little as 1-2 kilometres across.

Q: What are the warning signs of a tornado?

Q: Where can I find out more about past tornadoes in New Zealand?

NIWA has created and maintains the New Zealand Historic Weather Events Catalogue - a catalogue of major weather events in New Zealand over the last 200 years. The information has been collated from newspaper reports, journals, books and databases kindly provided by various organisations and individuals. For each event we identify the regions affected, the hazards types associated with the event and the resulting impacts.

The most damaging and lethal tornado in New Zealand occurred at Frankton (Hamilton) on 25 August, 1948. The tornado carved a 100–200 m swath through the suburb, causing 3 deaths, 12 injuries, damaging 150 houses and 50 businesses with an overall damage cost of $60 million.

Last year, a tornado in the Hobsonville suburb of Auckland killed three people, tore roofs off buildings and is responsible for an estimated $13 million in cleanup costs, and $6.5 million in insurance claims.

More information on the Hobsonville tornado

Another notable event occurred on the west coast of the North Island, when a swarm of at least 7 tornadoes hit the Taranaki coast on Wednesday the 4th and Thursday the 5th of July 2007 causing widespread damage in the region.

Oakura, a town 12 km southwest of New Plymouth was most affected in that event. Roughly 50 houses suffered major damage, some of it irreparable, when two tornadoes ripped through the town.

Many other tornadoes in remote rural areas will be unreported.

Current research at NIWA is investigating very high resolution weather forecast models (which demand huge computational resources) ability to predict the occurrence of mesocyclones. If successful, this could potentially help forecasters to identify mesocyclone formation between 6 and 12 hours in advance, increasing warning times.

Q: I've seen much higher numbers of tornadoes quoted in the media – why the difference?

Sometimes numbers like "20-30 tornadoes are observed in NZ per year" appear in the media and seem to be originate from a Civil Defence fact sheet, which conflicts with the number we quote of 7-10 "reported" tornadoes per year.

The discrepancy can be partly attributed to the reasons below.

Tomlinson (1) says that the average of reported tornadoes is about 15-17, and suggests that about twice as many actually occur but about half are unobserved as they occur in sparsely populated areas. As a recent example, on July 5 2007 in Taranaki there were 7 confirmed tornados (either by eye witness or by damage survey), but likely about 20 overall given the damage in other areas spotted by helicopter.

Also, waterspouts appear to have been included by Tomlinson and we would not necessarily include waterspouts now in our annual count, especially if there was an indication that they were a true – i.e. not associated with a thunderstorm – waterspout (like the ones off Lyall Bay in Wellington in 2012) rather than a tornado over water (like Hokitika earlier in 2013, which did eventually came ashore and caused damage in the town).

There is also an issue with counting the tornadoes themselves, for example, counting some historic cases with multiple tornadoes as only one tornado. Sometimes two or three may have occurred but a historic newspaper account may report only one; alternatively, old climate summaries may have counted "days when a tornado occurred", meaning that if two occurred on one day they would have been counted together as one.

Seelye (2) in 1945 quotes nine reported per year, which is much closer to what we have been getting the last few years.

In the past few years, numbers quoted in the NIWA/GNS natural hazards annual summary have been something like 7-10 damaging tornadoes reported per year. So not only do we have considerable year-year variability but decade-to-decade as well. 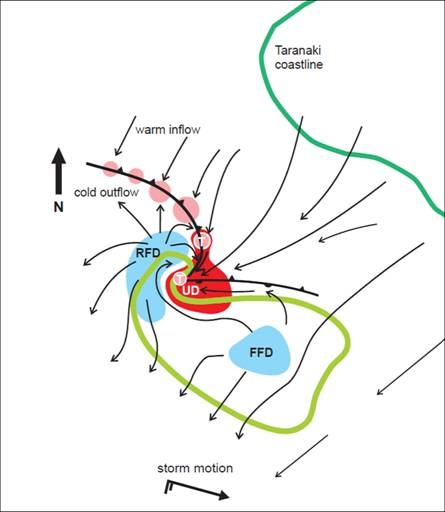