Rip currents are approximately shore-normal, seaward-directed jets that originate within the surfzone and broaden outside the breaking region. Velocities exceeding 2 m/s have been measured, so they pose significant dangers to beachgoers, as they can pull even the strongest swimmers into deep water. It is therefore desirable to predict the presence of rips currents to forewarn beachgoers and lifeguards.

We explored a method of forecasting rip occurrence from offshore wave forecasts. The rip forecast was based on an empirical probabilistic relationship constructed from five years of coincident rip observations and hindcast waves at Tairua Beach.

Rips at Tairua Beach were identified from video images collected between 2001–2005 (Figure 1). A wave model provided wave data for correlation with the rips. Empirical joint probability matrices were constructed from the 5-year video-imaging database of rips coincident with hindcast waves. The probability matrices were used to calculate the probability of rips occurring over the period 2001–2005, based on wave hindcast information. In Figure 2 the predictions are compared with observations for the arbitrary period March–August 2003. The probability matrix based on significant wave height (Hs) showed potential for predicting the presence or absence of rips. Peak period (Tp) and Peak Direction (Dp) showed little variation and no predictive trend. The joint probability matrix of Hs and Tp showed slightly better ability than Hs on its own and this model correctly predicted the presence of rips 76 % of the time during 2001–2005. 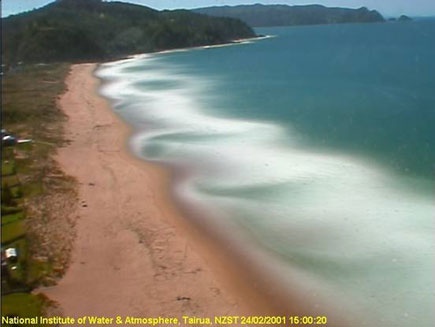