NIWA has recently implemented a large wave model (NIWAM) for the oceans around New Zealand. This is based on WAM, a 3rd generation model which accommodates the processes of wind generation, white-capping and bottom friction, and includes a direct estimate of non-linear energy transfer through four-wave interactions. NIWAM has been established on a 1.125° resolution grid (see image below) covering the Southwest Pacific, New Zealand, Australia and the Southern Ocean. Wave spectra are computed at 16 equally spaced wave directions around the compass and 25 logarithmically-spaced frequencies, between 0.0417 Hz (or 24 sec period) and 0.4518 Hz (2.2 sec period). The model has been tested against buoy data from Foveaux Strait and Mangawhai.

The image below shows the complex pattern of significant wave height and wave direction around New Zealand on a particular day. As boaties will know, wave heights vary considerably over even a short period. To describe waves, engineers and scientists use a statistic called the significant wave height, which is the average wave height of the highest one-third (or 33%) of waves in a sea. That way, we err towards the higher waves, which cause more damage or difficulty. NIWAM simulations of wave conditions in the Southwest Pacific at 12UTC September 22, 1996. Significant wave height (m) is shown in false colour, while arrows in every second grid cell of the model show wave direction, with their length proportional to wave height. In this simulation the model uses input wind data sourced from the European Centre for Medium-Range Weather Forecasts (ECMWF).

Knowing wind conditions in the recent past, the NIWAM wave model has been used to simulate what the wave conditions would have been over a 20-year period from 1979 to 1998. This allows long-term wave statistics to be computed for each region, which then forms the basis of nationally consistent wave climate. An example is the 20-year averages of significant wave height subdivided into seasons (Click plots to enlarge). 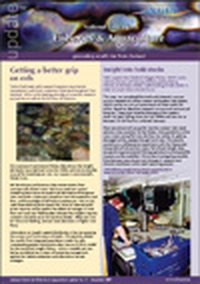 A recent large storm on Waitangi Day (6 February 2002) caused havoc along eastern coasts with the Jody F Millenium grounded off Gisborne and large waves pummelled the south Wellington coastline. Significant wave heights measured by the buoys peaked at 7 to 8 m off Baring Head and Banks Peninsula for this event, with maximum waves up to 11–13 m.

Verifying the wave model
The results from the model hindcast have been compared with data from wave buoys deployed at various times in the past at several sites around New Zealand (shown below).

Foveaux Strait Buoy
This was located in 100 m water depth. Model results were corrected for the effects of limited fetch to the coast before comparison with the data (shown below, click to enlarge).

Mangawhai Buoy
This was located in 30 m water depth, in a site sheltered by surrounding land, and affected by refraction of waves over the seabed topography the variable depth.

Waves from Satellites
Waves are available from a number of satellite sensors, including radar altimeters and synthetic aperture radar (SAR).

A radar altimeter aims a narrow beam directly downwards. From the spread in the return signal, the wave height can be measured.