NIWA scientists have used two sediment ‘fingerprinting’ techniques to identify the contribution of the major sediment sources by erosion processes and land use in an Auckland catchment.

Dr Andrew Hughes and his team have been focusing their research on the Hoteo River catchment, which is the largest river draining into the southern Kaipara Harbour. Kaipara Harbour is one of the largest harbours in the world with more than 400 square kilometres of sandflats and mudflats exposed at low tide. Recent expansion of these mudflats and worsening water quality has been linked to increased catchment erosion in response to deforestation and the establishment of agricultural land uses.

Sediment delivery to waterways can be reduced by catchment rehabilitation measures such as stream bank planting, exclusion of livestock from riparian areas, space-planting of poplars/willows, and afforestation of eroding pastoral land. However, for these measures to have ‘best bang for buck’, knowledge of where most sediment comes from in a catchment (and what processes cause it) is required. To date, very little research has been carried out in New Zealand to identify the relative contribution of these different sediment sources. As a result, catchment rehabilitation measures aimed at reducing sediment delivery to streams may not be targeted where they will have most benefit. Photo: Andrew Hughes
In New Zealand river catchments there are three primary sources of catchment sediment: hillslope or soil erosion, mass wasting (such as landslides or mudflows) and river bank erosion. The relative contribution of each of these sources in a given catchment depends on the catchment geology, soils, slope, rainfall, land cover and land use history.

Fallout radionuclides (FRNs) have been used to identify whether sediment is derived from the surface (hillslope) or subsurface areas due to bank erosion and mass wasting sources. The NIWA-developed compound-specific stable isotope (CSSI) sediment fingerprinting method is being tested to see if it can further differentiate mass wasting sources from bank erosion sources. 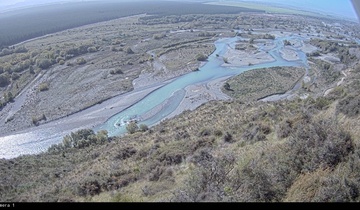