What is the chance of a warm summer in Invercargill?

In this activity you will analyse the Southern Oscillation Index and investigate the chances of getting below normal, normal or above normal summer temperatures in Invercargill.

El Niño and La Niña are long-term climate events that affect the temperature and rainfall pattern of New Zealand. They are opposite extremes of the ENSO cycle which is a pattern of fluctuations in atmospheric pressures around the globe.

The Southern Oscillation Index (SOI) is derived from the difference in barometric pressure between Tahiti and Darwin. Pressures are normally higher in Darwin than Tahiti during an El Niño. Scientists use the SOI to help establish whether El Niño is present and how strong it is. A strong negative SOI (more than -1) indicates an El Niño and a strong positive value (more than +1) indicates a La Niña.

The ENSO cycle affects rainfall and temperature in New Zealand. During a La Niña warmer than normal temperatures typically occur over much of New Zealand.

In a La Niña period Invercargill has a greater chance of above normal summer temperatures.

These probabilities can be represented as proportions of a pie chart During “Normal” conditions all the proportions would be equal. During El Niño the “Below” category is largest. The proportions for each category will actually depend on the strength of the El Niño or La Niña event and will differ from location to location and from season to season. 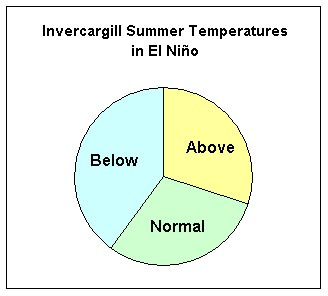 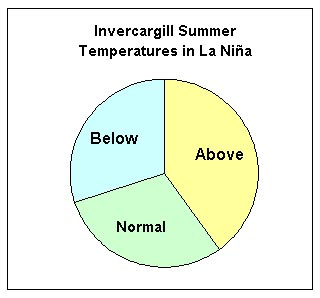 “Normal” refers to the Standard 30 year Normal period 1961 – 1990. A standard normal period is chosen to ensure that climate averages are calculated on a consistent period. 30 years is considered long enough to calculate a representative average and to reduce the impact that one-off, very extreme events have on the average.

Work in pairs.
Print and cut out the El Niño pie chart given in the printable pdf file and make a spinner by attaching it loosely to a square piece of card using a split pin. Allow more than 5mm from the head before bending the split pin. Place a washer between the pieces and ensure that the hole is large enough for the pie chart to spin freely. Make an arrow on the square base as shown in the diagram in the pdf file.

ENSO does not have the same affect in all parts of New Zealand. The pie charts for Auckland's summer temperatures are shown below: 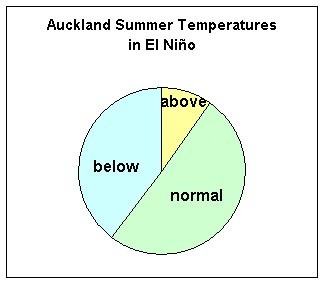 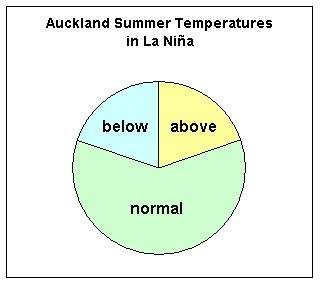 By the end of this activity students will be able to:

Student’s worksheet
Scissors, split-pin, washer
Copy of El Niño pie chart photocopied on to card to make spinner
OR a 10-sided die using faces 0-2 representing Above, 3-5 Normal, and 6-9 Below