In the 2010 NIWA Report on the seven-station temperature series (Mullan et al., 2010), two alternatives were offered for the adjustment at January 1945 between the records for Hokitika Town and Hokitika Southside. An offset of -0.52°C (a negative value meaning the new site is colder) was calculated by comparing the changes at Hokitika from 1935-1944 to 1945-1954 with those at four comparison sites. An offset of ‑0.68°C was calculated from a direct comparison between the two Hokitika records from the overlap of 30 months for August 1943 to January 1946. The second offset (‑0.68°C) was the one accepted in the 2010 Report.

Figure 1: Difference in monthly mean temperature between Hokitika and the average of Appleby (agent 4239) and Kelburn (agent 3385), for Hokitika Town (agent 3907, red) and Hokitika Southside (agent 37939, blue). The horizontal dashed lines show the average levels for the respective Hokitika stations, which have a difference of 0.52°C.

Figure 1 shows the difference between the Hokitika temperatures and the average of temperatures at the two comparison sites of Appleby (Nelson) and Kelburn (Wellington), over the longer period 1932-1964, where the offset is also -0.52°C. Close inspection of the graph reveals two important features:

After the screen refurbishment, the Hokitika Town temperatures were slightly higher than those before about mid-1942, and hence the longer-term offset of 0.52°C is preferred. (This is very close to the January 1932 to mid-1942 offset.) Note also that the erroneously low mean temperature during 1942/43 (even worse for the minimum temperature) is a good example of why it is unwise to use very short comparison periods for estimating the effect of site changes. 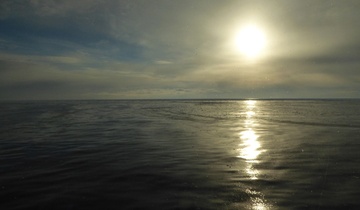