Cathy Kilroy is quick to admit she’s a person who doesn’t like throwing anything away. Dr Kilroy is the instigator and curator of NIWA’s diatom collection which now comprises more than 3000 samples – some frozen, some partially processed and some converted to microscope slides – from freshwater sources all over New Zealand.

Diatoms are microorganisms found in waterways used as indicators of water quality. They have silica cell walls that can be used to identify species long after the cells have rotted.

Dr Kilroy started the diatom collection in 1998 as part of a freshwater biodiversity research programme, and has been adding to it ever since. At that time about 500 samples from lakes, rivers and wetlands were collected and the details recorded in a book. The collection received a huge boost in 2005, shortly after NIWA confirmed the first documented detection of didymo – which, like Lindavia intermedia, is a diatom –  in New Zealand.

The didymo discovery prompted a massive biosecurity operation to determine how far it had spread. Algae samples were collected from almost every catchment in the country – some so remote they required retrieval by helicopter.

“It was such a comprehensive survey it would have been an absolute wicked shame to throw the samples out after one use. I insisted each one got a number and we put subsamples in little bottles and added them to the collection. They’re gold now,” Dr Kilroy says.

The book of records has now become a computerised database, which was used this year to find out more about the distribution of Lindavia intermedia in a project funded by Otago Regional Council. By targeting samples from lakes and lake outlets, Dr Kilroy discovered the alga had been widespread throughout New Zealand from 2005.

Lake snow is a nuisance slime in lakes that clogs fishing reels and can block water intakes but is not toxic. The Lindavia intermedia cells that cause it produce mucus-like strands which hang and drift under the water, sticking to fishing gear, boat hulls, swimmers and filters.

Lake snow was first reported in Lake Wanaka in 2004 where it was thought to have been contained for the next 10 years. However, Dr Kilroy’s research shows it was quietly gaining a foothold in South Island waterways over that time without anyone knowing.

Then in 2013 lake snow was reported in other South Island lakes which prompted research to gain a clearer picture of when it first arrived in New Zealand. At that stage, Dr Kilroy recalled a problem with slime in Lake Waikaremoana a few years ago and checked a 2008 sample which showed Lindavia intermedia was present at that time.

The findings suggested that, by 2005, the diatom that causes lake snow was present in at least nine lakes, six of which had not previously been known about, including Lake Moawhango in the North Island and Lake Gunn in Fiordland.

NIWA Greymouth freshwater ecology technician Paul Lambert, who currently looks after the slide collection, says the collection has proved to be extremely useful, due to Dr Kilroy’s foresight.

“It’s pretty simple but it’s very valuable because it provides a timeline of information. Who knows what we will need to look back on in the future? “

The recent Lake Taupo finding has prompted some councils to introduce regular monitoring programmes for the alga. They are also keen to find out more about what makes it thrive.
The difficulty with lake snow is that it can’t really be controlled and, as yet, scientists don’t know the environmental conditions that trigger the slime to form.

The alga Lindavia intermedia. The image of cells coloured neutral red (right) indicate a stain which is taken up by living cells. [Photos: Cathy Kilroy, NIWA]

Dr Kilroy hopes the NIWA diatom collection will provide opportunity for further research that may result in ways to manage it.

Meanwhile, she is still filling little bottles with algae samples and adding them to the collection.

“I’ve been chipping away at this for years; every now and then I think, ‘that sample really should be kept’, and off it goes into the collection.” 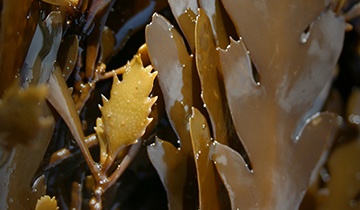