As the fish species that are most sensitive to turbid conditions do not occur in all rivers and streams, and are not necessarily present at all times of the year, the application of turbidity limits to protect fish depends on knowledge of both the distributions and life history patterns of the sensitive species. NIWA has therefore developed a decision support system (DSS) to help water managers apply these limits.

This DSS can be used for:

The Decision Support System has two parts: one for peak flow (see link below) and the other for base flow (see link below) conditions. The DSS for peak flow conditions is based on tests that determined the turbidity levels causing the death of fish within 24 hours. In comparison, the DSS for baseflow conditions is based on experiments that identified the turbidity levels at which fish behaviour (i.e. avoidance and/or feeding) was affected.

The DSS is based on seven years’ research by NIWA. Although it is state-of-the-art, many gaps in our understanding of how turbidity affects fish still remain and would take a further seven years to fully explore and refine. In particular, knowledge of the long-term implications of increased turbidity on the habitats and foods of fish (as against on the fish themselves) is in its infancy. Furthermore, experiments with rare species have not been carried out because of their scarcity. Therefore, this DSS only covers the direct effects of increased turbidity on common riverine fish (i.e., the mechanisms on the blue side of the diagram to the right). It does not address the potentially more insidious, indirect effects of settled solids on river or stream habitats (green side of diagram top right). Turbidity limits therefore need to be set with this potential limitation in mind. DSS for setting turbidity limits at base flows

DSS for setting turbidity limits at base flows 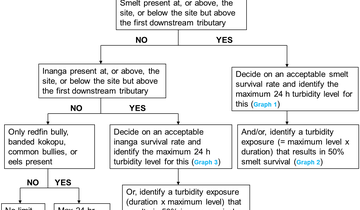 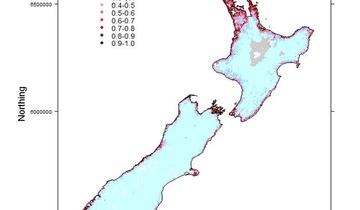 Predicted distribution maps for the most sensitive species (i.e. banded kokopu, smelt, inanga, trout) are available on the right hand side.