Pond life on the McMurdo Ice Shelf, one of the world's strangest ecosystems Standing near Bratina Island on the McMurdo Ice Shelf in the southwest corner of the Ross Sea (see map), it is difficult to imagine you are on floating ice in Antarctica. Only the distant 3000-metre, ice-shrouded peaks of the Royal Society Range and the below-zero air temperatures remind you where you are, for the surface of the ice is almost completely covered by rock debris.

This surface debris is derived from an unusual source – the seafloor below the ice shelf – and it gets there by a suitably bizarre mechanism. The part of the McMurdo Ice Shelf that lies primarily between Bratina Island and Brown Peninsula floats on a relatively shallow area of ocean. The ice shelf touches the sea floor in many places and, as the cold seawater freezes onto the underside of the ice and onto the sea bed, it locks in sea-floor sediments (and sometimes marine animals as well). These sediments are then gradually transported towards the surface of the ice shelf, on a type of “ice conveyor belt” driven by the loss of ice at the surface through melting and ablation, and formation of new ice by seawater freezing onto the bottom of the ice shelf. In this way ice gradually moves upwards, carrying with it material trapped within. Once at the surface, the trapped marine sediments are released during ice melt and add to the layer on the undulating surface of the ice shelf (see diagram). The rock debris brought to the ice surface enhances the warming effect of the summer sun and increases the rate of melting. This strange process has produced a landscape of tens of thousands of ponds over the 1500 km2 ice shelf. Thousands of ponds on the undulating, rock-covered surface of the McMurdo Ice Shelf. (Photo: Clive Howard-Williams)

Cross-section of the McMurdo Ice Shelf at Bratina Island, showing features involved in the formation and evolution of the ice shelf ponds. (Graphic: Greg Kelly)

Ponds with starkly differing physical and chemical properties can be very close together. For example, we have called a group of three ponds lying within 50 m of each other. Fresh Pond, Brack Pond and Salt Pond. They have electrical conductivities (a way of measuring salt content) of <200, 15,000 and 55,000 µS/cm, a range from drinking water to hypersaline. The range of chemistries is created through shifts in the water balances of the ponds. Pond persistence depends on enough meltwater entering the pond to replace water lost to evaporation and sublimation. When the supply of meltwater is reduced (which can happen, for example, if there is a shift in local topography as the ice shelf moves), evaporation may exceed water input. Concentration of pond waters through evaporation and freezing will result in an increase in conductivity, and potentially complete drying.

The ponds come in all sizes, from small lakes hundreds of metres long to pools 2–5 m in diameter. Some lose their ice cover in summer, others retain it, and some may lose it in some years and keep it in others. Some are tidal and, as the ice shelf is continually moving, all are temporary within a time scale of years to decades. Among the rock debris cover of the ice shelf are signs of old ponds, revealed by salt lenses and dried layers of algae that once formed at the bottom of the ponds and have now dried up and been lifted out through ice movement.

Antarctic ponds such as those on the McMurdo Ice Shelf are colonised by a variety of stress-tolerant organisms – the major biodiversity elements within otherwise barren landscapes. NIWA researchers and our international team of collaborators have found that distinct biological communities develop in different chemical and physical conditions.

A small pond on the surface of the McMurdo Ice Shelf shows brown-to-orange pigmented microbial mats lifting off from the base of the pond. (Photo: Ian Hawes) 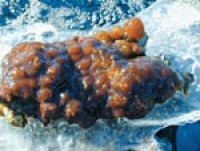 Although planktonic organisms may be common, biological activity in the ponds is almost always dominated by benthic (bottom-dwelling) microbial mats. The species of cyanobacteria and diatoms that form the mats vary with the type of pond, but the mats themselves are similar in appearance and structure. Almost all these communities form mats. Why is this?

Well, in many ways mats can create a relatively benign microhabitat within the ponds. The copious production of mucilage within the mats appears to play a role in protecting them from damage during freezing and desiccation. A typical pond mat has a heavily pigmented layer of cyanobacteria at the surface, which gives it a characteristic black, brown or orange appearance. The pigments in the surface layer include some that are specially effective at screening out harmful UV radiation. The highly pigmented surface protects an under-layer that flourishes at the much lower light levels that penetrate through the upper layer (1–5% of that at the surface). This lower layer is usually intensely green, and is the site of most of the photosynthetic activity in the mat. Photosynthesis results in this layer becoming super-saturated with oxygen, yet just a few millimetres below, oxygen is completely absent as it is consumed by bacterial decomposition. In this anoxic layer, other groups of bacteria grow – such as those utilising sulphate to produce sulphides, or those that reduce carbon dioxide to methane. These bacteria recycle the nutrients needed by the overlying photosynthetic layer. Within the microbial mats at the base of the ponds, we find all of the microbial groups that occur as part of the biogeochemical cycles in more temperate regions.

These ponds offer insights into some spectacular moments in the early history of life on earth. The oldest recognisable Precambrian fossils are of laminated cyanobacterial mats, almost identical to those seen today on the McMurdo Ice Shelf. A similar structure may indicate similar function. Cyanobacterial mats may have been among the first genuine communities of interacting microbial species. At the end of the Precambrian, many scientists believe that the earth went through extreme glaciation events (Snowball Earth) when even the tropics froze. Systems like the McMurdo Ice Shelf may have been among the few refuges where early life could survive with little oxygen, extreme temperatures, corrosive chemistry and high UV. It is tempting to believe that the ability of these mats to tolerate the extremes of Antarctica, stems from the genetic lessons learnt at that time, perhaps as long ago as 2 billion years! A walk on the McMurdo Ice Shelf offers a glimpse of what early life on Earth must have been like.

Ian Hawes is based at NIWA in Hamilton; Clive Howard-Williams is at NIWA in Christchurch.

This research receives FRST funding in “Antarctic Aquatic Ecosystems” (C01X0220) and benefits from collaboration with the Cawthron Institute.