Summer Series 2017 - Look out for these marine pests

Every year NIWA carries out numerous marine surveillance missions, surveys at ports and harbours around the country. Their divers are looking for the pests that have hitched a ride to New Zealand waters and are capable of destroying our unique ecosystems and shellfish industry.

Knowing your enemy is crucial. So swot up on six of these beasties if you’re enjoying the ocean this summer. And if you do happen to spot something that shouldn’t be there, you can report it by going to the Marine Biosecurity Porthole. The Mediterranean fanworm is a spectacularly large worm with a characteristic whirl of filaments. Its tubes can be over 40cm long and the worm looks like a graceful, golden flower in the water. Populations are increasing, particularly around Auckland. This species can be a major fouling problem on structures and boat hulls, and a competitor to native fauna. The droplet tunicate forms large colonies and is generally found in muddy bottomed tidal habitats and on structures like wharf piles and aquaculture equipment.  It is generally submerged just below the waterline, but can often be seen at low tide. Its size is influenced by seawater temperatures, with it decreasing over winter, but rapidly re-growing in summer. It can smother beaches, rocks and tide-pools and displace native species and has become more prolific in Northland.

The droplet tunicate looks like clusters of white tubes. Each tube is actually a cylinder containing numerous small individuals.  The white tunics can sometimes appear flecked with orange. The clubbed tunicate grows on natural and artificial hard marine surfaces. It is most commonly seen on wharf pilings, aquaculture structures, ropes and hulls and may also be found attached to rocks, seaweed and on shellfish. The clubbed tunicate can reach densities of 500-1500 individuals per square metre enabling it to outcompete other species.

The clubbed tunicate has a long, leathery skinned cylindrical form, tapering to a stalk with a disc shaped holdfast that anchors them to hard surfaces. The sea squirt ranges in colour from yellowish to reddish to brownish and can grow up to 160mm in length. It often appears fuzzy underwater. The Asian date mussel, also known as the Asian mussel or bag mussel, is a small saltwater mussel. It inhabits the intertidal and subtidal zones, and produces threads that form extensive mats on the sediment surface. It grows fast, is short-lived and can obtain densities of thousands per square metre.

The Asian date mussel alters seafloor habitats and can also limit the amount of plankton available as food for other species.  It is relatively small and has a greenish shell which has zig-zag markings and iridescent radiating bands. The shell  is easily crushed and can grow up to 3cm long. Asian kelp is spread mainly by fouling on vessel hulls and is present in almost all of New Zealand’s international ports and harbours.  It grows from the low intertidal area to subtidal depths of around 15 metres on any hard surface and can form dense forests in sheltered reef areas, resulting in competition for light and space which may lead to the exclusion of native plants and animals. Mature plants are a brown, green or yellow colour and grow up to one to two metres with a visible midrib up the plant. Juvenile Asian kelp have an undivided blade. The Asian paddle crab is found in the Waitemata and Whangarei harbours and Waikare Inlet in Northland. Adults can produce hundreds of thousands of offspring and are capable of swimming large distances. It is also aggressive, can inflict a vicious bite and competes with other species for habitat and food.

It has paddle-like hind legs with adults having a shell width of around 12cm with six distinct spikes on each side of the eyes.  It ranges in colour from pale green through to a deep chestnut brown with purplish markings.  Most found in the Waitemata Harbour tend to have brown-orange markings and white tips on the claws. 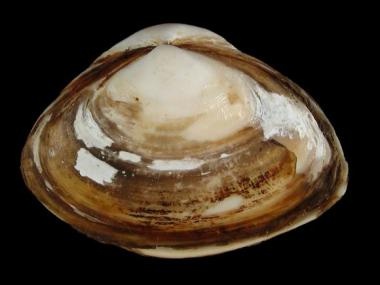 The Asian clam is native to the northwest Pacific ocean, occurring in eastern Russia, Japan and China. It has only been found outside its native range in the San Francisco estuary, USA.

Although it hasn't been found in New Zealand yet the Asian clam represents a significant biosecurity threat. It can occur in very high densities; over 25,000 per square metre. In some parts of San Francisco Bay estuary it makes up most of the biomass in the sediments. The shell of the Asian clam can be yellow, tan or dirty white with brown staining. It measures up to 3 cm in length. Unlike the similar New Zealand native Corbula shell, one side of the shell is larger than the other, resulting in a distinctive “overbite”.

Summer Series 2017 - Look out for these marine pests