There are two species of kōura in Aotearoa:

The two species have subtle differences and distinct distributions (they occupy different areas).

Kōura have their skeleton on the outside, this is called an exoskeleton, which they moult (shed) as they get bigger in size.

During moulting they become soft for a short time as the new outer shell hardens, they can grow back limbs they have lost through a series of moults.

Kōura move by walking along the lake or stream bottom or flicking their tail to swim rapidly backwards. 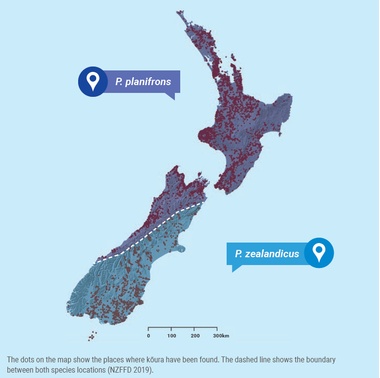 Kōura are agile. They can run very fast forwards and swim backwards by flicking their tails. [Photo: Tracey Burton]

Koura live in lots of different types of freshwater environments. They are found in streams, rivers, ponds, lakes and wetlands in native forest, exotic forest and pastoral waterways. In some wetlands, during the dry summer months when water levels get very low, koura can burrow deep into the mud and then come out again when the water returns.

Kōura are more active at night and usually seek cover from predators during the day. They are highly territorial and need places to hide from each other as well!

They will find shelter almost anywhere including under stones, boulders, logs and aquatic plants. They are also able to make little burrows for themselves in the mud.

In some of our lakes, kōura take predator avoidance very seriously, especially in areas of the lake that are sandy and where they don’t have many places to hide.

For example, at some beaches around Lake Taupō-nui-a-Tia, every night the kōura travel to the shallower areas near the shore (called the littoral zone) to find and eat food. As dawn approaches, they move back to the deeper waters of the lake to take cover.

The daily migration of these kōura has probably evolved to protect themselves from fish - like perch, catfish, trout and tuna, birds like shags and kingfishers, as well as rats.

Kōura are opportunists and eat a wide variety of food. Food for kōura include fish, plants, snails, mayflies and mayfly larvae – live or dead!

Kōura use their strong claws for cutting and catching prey. Their walking legs have small pincers on the end which can be used to sort and pick up small pieces of food. Where there are lots of kōura (high densities), they have also been known to eat each other. What are the threats?

Across Aotearoa kōura populations are exposed to a range of environmental impacts including things like the removal of native bush, the drainage of wetland areas, too much sediment, eutrophication in lakes (too many nutrients), and the introduction of pest species to our waterways.

Internationally some freshwater crayfish species are being impacted by fungal infections.

How can we help kōura?

Kōura are an important taonga species in our freshwater ecosystems. Some ways you can help our kōura populations include: Juvenile found in a Northland stream. It can take kōura 2-4 years to become an adult – seasonality and water temperature have an effect. [Photo: Stuart Mackay, NIWA] Kōura are more active at night and usually seek cover from predators, and other kōura, during the day. [Photo: Stuart Mackay, NIWA] Kōura that live in lakes are thought to have two breeding seasons per year, one in late Autumn and one in Summer.