Day 36 of the Ross Sea Environment and Ecosystem Voyage 2019 on RV Tangaroa. We are back in New Zealand waters and due to arrive in Wellington on the morning of Saturday 16 Feb.

The science work has mostly finished (except for the underway sampling), and we are now into clean-up and report writing mode. A view of Scott Island on the way north. [Photo: Alan Hart, NIWA]

We had one final operation today: to recover one of the five deep ARGO oceanographic buoys which we deployed on the way south. This buoy has a faulty instrument, and the people in the USA responsible for the ARGO programme asked whether we might be able to collect it. The ARGO buoys profile the water column and return to the surface at programmed times to send their data via satellite. This particular buoy drifted north with the ocean currents about 400 km since we dropped it off on 11 January. Fortunately this put it right in the path of our return leg. The buoy was sent a command to remain at the surface this morning, and we were able to pick it up at lunchtime.

Farewell to Antarctica: the sun sets behind some of the last icebergs of the voyage. [Photo: Dave Bowden, NIWA]

It has been a very successful voyage. Thanks to the scientists aboard, the Tangaroa crew, and the vast support network ashore that have made it possible. We look forward to sharing our results with you in the months and years to come. 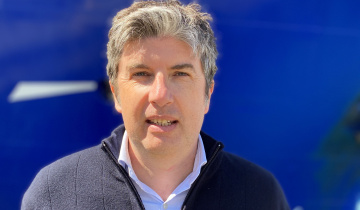