NZ has a range of different types of coasts, and so very different coastal erosion and sediment systems.

The east coast beaches of the New Zealand’s northern North Island have bays, and aren’t connected to each other. The black sand west coast beaches, however, are open and connected by a river of sand flowing north. This means that the options for management are different but, if we don’t know how the systems function, we can’t make good quality decisions on how to protect and develop our coasts.

The main contrasts between the western and eastern coastlines are in their geological setting and exposure to waves.

The west coast’s open sand system is characterised by little development and a rugged beauty. Along the 750km of shoreline between the Patea River mouth and North Cape, there are:

Ocean swells from the Tasman Sea and Southern Ocean are very energetic, and drive sand back and forth along this sparsely-inhabited shoreline.

In contrast, the east coast’s embayed (i.e. have bays), disconnected sand systems are more developed, with ports and residential subdivisions. This lee shore (i.e. it has wind blowing onto it from the sea) has gentler wave action, and is disturbed only occasionally by tropical cyclones. Beaches here are:

Headlands are important to both open and embayed coasts. They act as valves for coastal sediments, regulating sand storage and movement along the coastline. The amount of sand which is moved, leaked or stored is largely determined by headlands’ size relative to the:

In places with bays, the beach sand is largely trapped between headlands. Studies in these systems can be localised.

On the open, connected west coast, beach sand moves between beaches, jumping small headlands as it moves along the shore. It’s also captured for a time by ebb and flood tidal deltas at inlets. Studies of these systems need to take regional scale issues into consideration.

Sand movement and storage in embayments

We’re making detailed studies to quantify the hydrodynamic and sand transport processes across the beach, both near to the shore and at the headland boundaries of bays. To quantify sand movement, we combine numerical modeling with detailed measurements of hydrodynamics, bedforms and suspended sediment.

To study sand transfers around the Pakiri-Tairua headland, we’ve set up our hydrodynamic numerical model to simulate tidal currents. We’re also using a computer-controlled video monitoring system to monitor the exchange of sand between the beach and nearshore bars.

Our sea sled takes high-resolution measurements of beach profiles and ripple geometry. We use a boat to tow the sled out from the shore to beyond the surf zone.  We then move the sled in and out across the surf zone by using a truck-mounted winch on land, and an anchored pulley or boat in the sea.

We can accurately measure the sled’s position and level using a survey instrument sighted onto a prism mounted on top of the sled’s mast. An inclinometer corrects for the tilt of the sled. We measure ripples using a wheel that moves up and down over the ripples as the sled is dragged back and forth. We also measure ripples using an oblique (sideways-looking) underwater video camera.

ALICE is a tripod that is equipped with instruments for making high-resolution, synchronous, boundary layer measurements. ALICE comes equipped with:

The IMAGENEX sonar system is deployed on the underside of ALICE.

The transducers emit and receive acoustic beams which scatter off features on the seabed. The pencil-beam scans along a single line - much like a conventional echo-sounder - directly below the sensor, and gives accurate measurements of ripple height.

The fan-beam scans in a circular path, the radius of which the user can select. The images to the right shows the circular view from the fan-beam transducer. Ripples show up as coloured bands. The black lines are shadows left by objects on the instrument frame. The inset on the bottom left of the figure shows the profile measured by the pencil-beam transducer.

As part of a study of sand dispersal along the coast, we’ve taken samples from the black sand beaches of the North Island’s west coast between the Patea River mouth and North Cape.

We’re interested in sand movement and storage on a regional scale, and how cliffs, rivers and the continental shelf contribute to the “sand budget”. Our current understanding is that the titanomagnetite-rich black sand came mostly from the andesitic cone of Mt Taranaki in the south, with lesser contributions from the Waitakere volcanics in the Auckland region.

Other sources of minerals along the shore include the rivers in the south, which drain tertiary rocks, and the Waikato River, which drains a largely rhyolitic area. Southwesterly swell from the Southern Ocean drives sand northwards along the shore. Rates of longshore transport are thought to be very large, but no one really knows.

We collected a total of 150 sand samples from the mid-tide level of beaches every 5km along the west coast. Our preliminary results show mixed sand grain sizes and shapes. The grains have the  distinctive signature for titanomagnetite, which is relatively spherical compared to other minerals.

We can tell regional trends in sand dispersal along the west coast apart by looking at the local effects of sand size and shape measured using a Galai laser particle sizer.  can be differentiated by local effects from the sand size and shape signatures measured using a Galai laser particle sizer. We also made other measurements, like beach slope and orientation. We used a helicopter to get to sites quickly and beat the rising tide along many parts of the coast. Petrological analyses will reveal the origin of the black sands. See the photo on the right hand side of an example of a black beach.

Storms cause a ripple on the sea floor

We were lucky enough to have the boundary layer tripod armed with the IMAGENEX sonar out when Tropical Cyclone Gavin hit the Northland coast in March 1997. This gave us a rare opportunity observe the radical bedform changes that come with storms.

We put the tripod on a sandy seabed at a depth of 25m as the cyclone passed down the east coast. The sonar scanned the seabed in a radius of 15m about the tripod every 90 minutes during the storm. The storm had very high (up to 5m), long-period (11s) waves which lasted 130 hours.

In addition to measuring waves, currents and suspended sediment, we measured huge changes to ripple height, spacing and orientation using the sonar. During the storm, ripples changed from irregular, to long-crested sinuous, to long-crested, then back to long-crested sinuous and finally to short-crested irregular. Ripple height was the first to change, followed by steepness and orientation, then crest length, and lastly by ripple spacing. These changes took place in about 8 hours.

Relict ripples on the seabed before the storm were replaced by ‘equilibrium-range’ wave orbital ripples early in the storm. These were followed by orbital ripples in the ‘breakoff range’, which happened at the same time as a large increase in ripple steepness. There was no evidence for sheet flow. Because they need short oscillatory motion, orbital ripples occur most commonly in very shallow water under short-period waves. Orbital ripples in deeper water at Cape Rodney can be explained by the fact that the orbital motion of long-period waves is offset by depth, resulting in short orbital excursion at the seabed. A sudden increase in ripple steepness was associated with an order-of-magnitude increase in hydraulic roughness and a large increase in the amount of sediment suspended in the water. 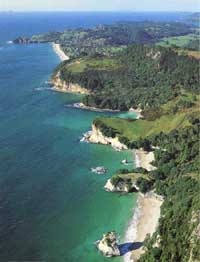 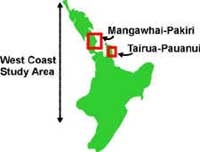 Map of the North Island of New Zealand showing embayments studied on the east coast and open sand system of the west coast. [NIWA] 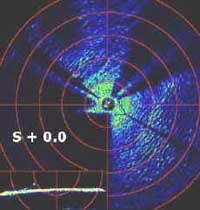 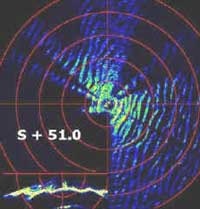 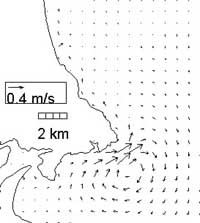 The Galai set up at NIWA, Hamilton. [NIWA]