NIWA staff involved with the Louisville Seamount Chain voyage have wide ranging skills and expertise. Several were involved in the planning stages of the survey, using their experience with where to go, their models predicting VME taxa in the region, or their mobilisation skills preparing all the gear required for a 5 week sampling trip.

Once on board the scientist's skills merge. Ecologists, biologists, taxonomic experts, modellers, and the electronic, swathe, gear, and database experts work a 24 hour operation in two shifts covering the various gear deployments.

Most are NIWA staff, but other New Zealand and international colleagues complement the operations with their knowledge and skills.

The overall research programme is coordinated by Ashley Rowden at NIWA who was unable to participate in the actual survey but is in regular contact with the vessel.

[See the photo gallery at the bottom of this post!]

Malcolm Clark is the voyage leader on this trip, a veteran of 75 surveys, and experienced in fisheries, seamount system and biodiversity research.

His primary concern is planning the survey operations, but he is also always keen to don his wet weather gear and work on the epibenthic sled sample material, or help wherever it is needed.

David Bowden has the 2nd in charge role of shift leader. He is a benthic ecologist and on board has overall responsibility for the DTIS and OFOP systems.

Steve is a fisheries scientist with High Seas and Antarctic VME research experience.

Malcolm, Steve, and Dave have regular discussions with the predictive modellers as to what the results are showing.

Arne Pallentin, a GIS and swath-mapping expert, begins the sequence of tasks at each seamount by mapping the seabed depth and it's reflectivity to indicate the hardness of the ocean floor. This is vital information required to carry out the DTIS and sled transects and, later, to fine tune the predictive models.

After mapping the seamount, the DTIS camera work takes over. Steve George is the electronics expert running the DTIS system. He regularly upgrades the systems and runs the CTD.

Running the OFOP programme (short for Ocean Floor Observation Protocol) that we use to log data on substrate and animals from the DTIS cameras during each cast, are on one of the watches Caroline Chin, Steve, Deb, Dave and Rob Stewart. Concentrating hard they describe the bottom type, invertebrates and fish from the video which is recorded on OFOP in realtime.

Like everyone onboard, Rob also has multiple tasks: from mobilising the equipment from shore, maintaining DTIS for his shift, keeping his eye on the aquarium system on board in which live corals are being held, to supporting the sled sampling operations.

The epibenthic sled is used to sample and ground truth the specimens seen by DTIS. A busy time with the scientists on deck sorting the catch.

Once the catch is sorted, more detailed specimen identification and cataloguing takes place – another ‘heads down’ busy time in the on-board lab.

Biologist Di Tracey has a deepsea coral focus, and is sampling live corals and holding them in the on-board aquarium in readiness for climate change studies and also supports the OFOP, sled sampling and cataloguing roles.

As one of the scientists involved in the predictive habitat suitability modelling, Owen Anderson is involved in regular discussions with Malcolm, Dave and others about what the results are showing. Owen is our echinoid taxonomist, and on board his focus is OFOP, sled specimen sorting, and specimen photography.

Cong Zeng is having his first seagoing experience. He is a PhD student from Victoria University, Wellington, and is on board to collect sponge and stony coral tissue samples for molecular and connectivity studies which form part of the overall research programme.

Cong also helps with all tasks during his 12 hour shift – we hope beginning a diverse career in deepsea science.

Debra Glasgow and Steve Wood are observing marine mammals and seabirds respectively. Whales appear to be absent from the area at the moment but a pod of charismatic dolphins, some pilot whales and several sperm whales were recorded by Deb in transit to the Louisville Ridge.

Steve has recorded numerous sightings of albratross, petrels, boobies, and a ternlet – some from the Kermadecs, others from the Chathams Island area.

A collection of photos related to the blog post 'NIWA scientists at sea'. 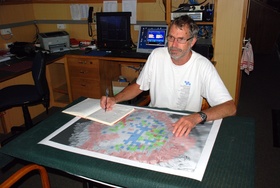 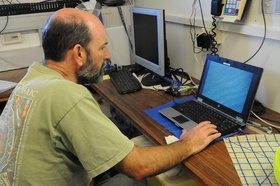 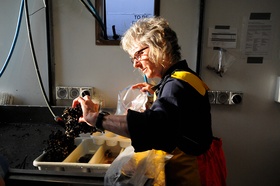 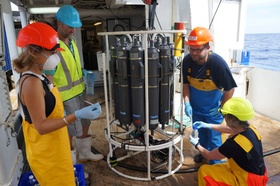 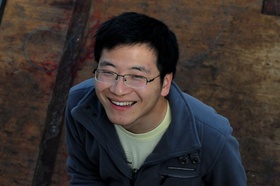 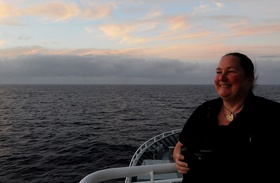 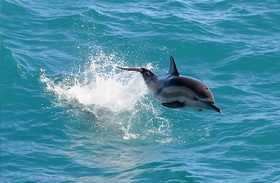 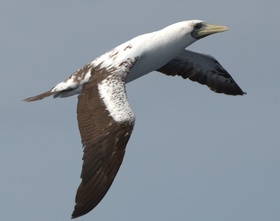 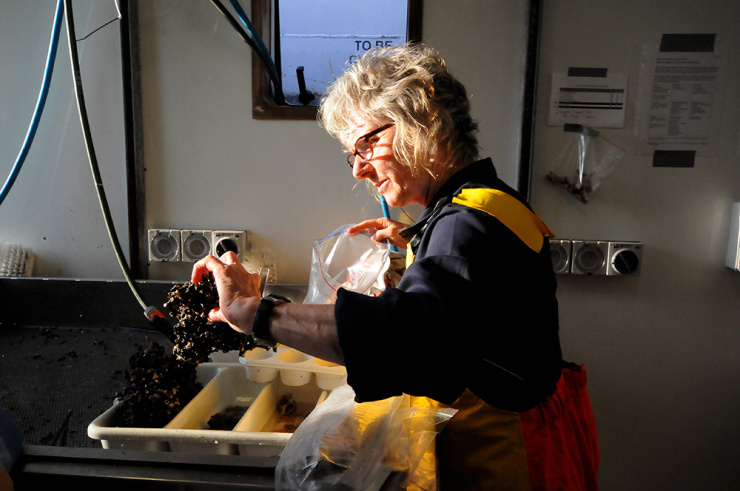