Our marine ecosystems are under pressure

Today’s marine ecosystems are under immense pressure from growing populations wanting more. From food provision to cultural and recreational opportunities, the increase in activity translates into more use of certain areas. This has resulted in a need to be able to predict cumulative effects, which are responses of the ecosystem accumulating over space and time from single or multiple stressors occurring in single or multiple events.

Considering the accumulation in space is important because if the areas affected by the stressors do not overlap, the seascape can become increasingly fragmented. However, if they do overlap, the overall impact can become much greater.

Looking at the accumulation in time is also key because if the timing do not overlap, the ecosystem may or may not have time to recover before the next even occurs. However, if the timing overlap, the magnitude of the stressor might be greater and lead to a reduced likelihood of recovery.

Important concepts to keep in mind:

Stressors can affect ecosystems in many ways

It is possible to focus more on stressors than activities and develop categories of stressor types that have similar direct effects on the ecosystem. This helps determine more accurate stressor magnitudes and coverage. It is then possible to link activities to the stressors and these stressors to the effects (red boxes). As you can see, there are numerous ways that responses can accumulate from the different stressor types. It then becomes important to know which stressor types are likely to create non-additive responses. There are numerous ways that responses can accumulate from the different stressor types.

A first step is to determine whether stressors are going to overlap in either space or time. This can easily be determined by looking at the activities in the area and determining which stressors they generate. The effect of an activity on a series of stressors is not generally equally strong, so we’ve produced a relative weight from 3 (strong) to 1 (weak). The following table shows a list of activities (columns) and the stressors they directly contribute to.  So bottom fishing can directly remove species and change the benthic habitat (by for example breaking up beds of shellfish).  Changing these benthic habitats can in turn create barriers to connectivity but that is not a direct effect. 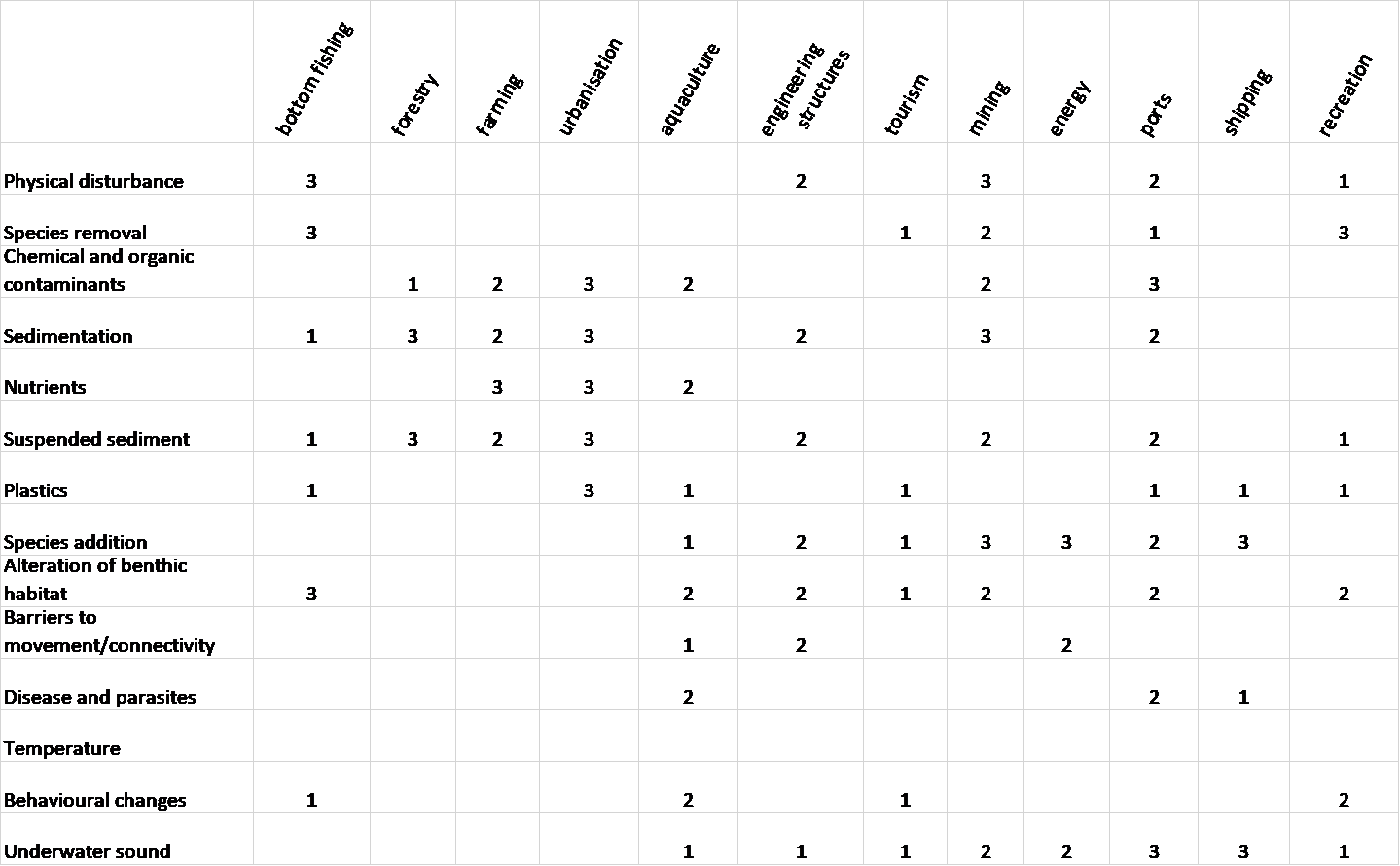 The second step is to decide what responses are important. Most of our work has been on benthic species- the plants and animals that live on and in the seafloor. Responses that are important to how this system functions and how it affects the water column above are:

The third step is to look at which of the responses are expected to be affected by the stressors and whether interactions may occur. We don’t have information on responses to all stressors, and experiments to determine these responses are time consuming, expensive and often unpractical to conduct at scales relevant to management – which is why we are developing techniques to try and predict these. We have summarized what is known about these interactions, which we are happy to share.