Contamination of shellfish by faecal microbes is a health hazard to the consumer and so is of particular concern to the commercial producer.

NIWA scientists have developed a model to predict shellfish contamination using a ‘neural network’ – a tool that has become increasingly popular for predicting the behaviour of complex systems.

Shellfish are most likely to be contaminated by faecal microbes after heavy rain, when septic tanks fail or livestock waste is washed from paddocks and scoured from streambeds.

Shellfish farmers monitor for the presence of indicator species such as E. coli to provide warning of contamination and take preventative action, such as temporarily suspending harvest. But indicator species monitoring can be costly, and may not provide timely information.

Being able to predict contamination, even just a day or two in advance, could reduce the risk of contaminated product reaching the market. Making such predictions is not easy, as both the physical environment and microorganism growth are complicated.

Although there are process-based predictive models that couple hydrodynamic equations (for predicting tidal currents, waves, etc.) with equations describing growth of microorganisms, these are not easy to set up and run. Such models are generally used for exploring scenarios and risk assessments, but are not so useful for operational use.

What’s needed is a predictive model than can be used on a daily basis at the shellfish farm. Linear regression statistical models have been tried in the past, but they seem to be fundamentally incapable of dealing with the complexity of the problem, and rarely  produce very accurate predictions.

We have developed a means of predicting shellfish contamination based on a neural network (NN). Neural networks are non-linear mathematical modelling tools that have become increasingly popular for predicting the behaviour of complex systems.

Experimental work had already shown a correlation (relationship) between the indicator species E. coli and turbidity (cloudiness) in streams.  We then tested how well we could ‘hindcast’ past turbidity at a coastal commercial oyster farm near Auckland, using an extensive dataset. Hindcasting involves predicting events that have already occurred. We tried to predict past turbidity levels using a range of measured predictor variables, including:

From this we learnt how to fine-tune the NN. We then brought contamination (indicated by E. coli in the flesh of farmed oysters) into the analysis. Results showed that it is easier to predict exceedance of particular E. coli thresholds than it is to predict actual E. coli counts, but that is still useful in terms of producing early warnings.

The analysis has culminated in the production of a prototype operational system in which the NN runs on a computer in the shellfish farm office. It provides daily predictions of E. coli up to 5 days in advance, based on weather forecasts. The NN teaches itself to make better predictions as the data archive grows. We are presently analysing the accuracy of the predictions.

Because the NN is site-specific, a certain amount of set up data is required to install the system at any new site. 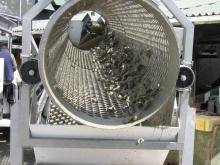