Based on the characteristics of individual organisms, it is also a powerful way to measure ecosystem health and vulnerability to human activities.

These activities often happen in the same locations and stress organisms living there in a variety of ways, meaning we need to understand cumulative effects.

Many people may not see this as an issue, thinking that these habitats are uniform plains of sand or mud. However, these places are complex, species-rich ecosystems that also contribute substantially to how the greater ecosystem functions. This means they are important to the goods and services that marine ecosystems provide humans.

For example, organisms living in these areas can:

The biological traits of organisms – e.g. having a large, fragile body and limited mobility, or feeding on algae in the water - can also make them sensitive to specific human activities.

Until recently, decreases in biodiversity were simply seen as loss of species. Now, there is a shift towards the concept of functional diversity - the number, type and distribution of functions performed by an ecosystem’s organisms - as a complement to species diversity.

For example, the switch from coral- to algal-dominated reefs in Jamaica in the 1980s was likely caused by a drop in the number of herbivorous fish (fishing) followed by the mass deaths of herbivorous sea urchins.

Biological traits also can predispose an organism to be susceptible to a particular stressor, for example organisms that feed by filtering out algae from the water will be susceptible to increases in suspended sediment in the water resulting from dredging, land run off, and bottom trawling.

Biological traits analysis allows us to compare the composition of, and biodiversity between, widely separate locations, independent of regional species pools.

For example, a study compared two locations in New Zealand likely to have different species pools: Northern Hauraki Gulf and Tonga Island Marine Reserve. It found that both locations had similar biological traits, even though the two sites only had 112 of the 374 observed taxa in common.

The study also highlighted the importance of maintaining habitat variety to support ecosystem functioning. It found differences in the specific traits important for ecosystem function across the habitats studied.

Table 1: Biological trait categories can be related to ecosystem function, sensitivity to stressors and recovery.

Increasing our understanding of the relationships between:

Using trait-stressor relationships to identify the sensitivity of locations to particular activities in order to predict: Figure 1: example of how horse mussels (Atrina zelandica) can alter the structure of a muddy habitat by providing a hard surface for other organisms to grow on. [NIWA] 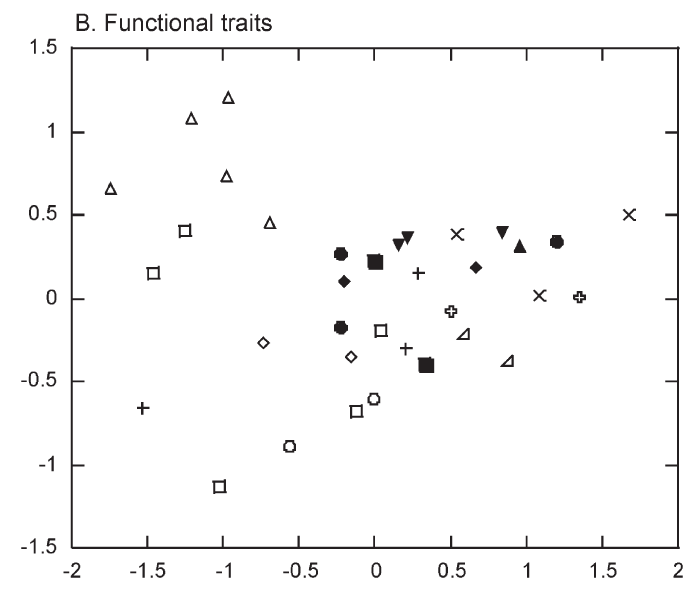