A suburban Hamilton stream has turned out to be the first spawning ground ever found of the giant kokopu whitebait.

NIWA's 10-year research into the species was rewarded with the discovery of the breeding area earlier this year by NIWA Fisheries Technician Josh Smith and Fisheries Scientist Dr Paul Franklin.

The elusive fish were found in Bankwood Stream in Donny Park, near the suburb of Chartwell, a few kilometres from the Waikato River.

The team fitted electronic tags to 43 adult giant kokopu and placed antennae at the lower end of the stream to detect any fish leaving.

"When only one left, it gave us a good idea that they were spawning in the stream," Dr Franklin said.

A hand-held electronic tag reader was used to track the movement of fish in the stream during the day. At night, the scientists used spotlighting with a torch to find and then catch fish in a net so they could identify them and check their condition.

Last year, they found several ripe (ready to breed) males, which made them "reasonably confident" they were spawning in the stream. Then it became a matter of narrowing down where and when the fish were actually spawning.

"In the first week of June this year, we finally found a couple of ripe females in the stream for the first time. We expected them to spawn on a bank when the water level was higher after rain."

A few days later, their endeavours paid off when Smith discovered several nests of eggs on the banks of the Bankwood Stream.

When the giant kokopu spawn, they lay their eggs in the grasses and vegetation on the bank where there is shade and high moisture content to provide the optimum conditions for hatching. But hatching will only take place when the stream rises again.

"This finally fills in the gap for all whitebait species. We know that spawning is a critical and susceptible part of the life cycle. They require a specific vegetation and water flow to lay and hatch eggs, which is a risky strategy. But the more the environment is modified by humans, the more risky that strategy becomes," Dr Franklin said.

"There is a good chance they are spawning in other streams around Hamilton and if we can provide and protect the right kinds of habitat, others may stay.

"If one of these habitats is not available, the species will ultimately die out." 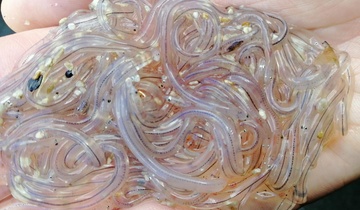