Samoa’s devastating 2009 tsunami highlighted the importance of early warning systems for the small Pacific nation. But the Samoan community is also looking for an early warning of another kind – a system to help the islands cope with the changing climate.

As a small economy reliant on agriculture, fishing, forestry, and tourism, Samoa is particularly vulnerable to the anticipated effects of climate change: rising sea level and changes to the frequency and severity of tropical cyclones, drought, flooding, and increased risks of climate-related disease and pests. All are seen as a barrier to the country’s future development.

Samoans see their climate changing Anne Rasmussen is Principal Officer on Climate Change for the Ministry of Natural Resources and Environment (MNRE) in Samoa. She says ‘climate change’ is a still a relatively new term in Samoa, but the people have been aware that it has been happening for some time.

“Their traditional knowledge and observations over the years show incremental changes to their landscape, affecting food crops and their livelihoods. They know instinctively that it’s happening. And now the government is working hard to integrate climate change adaptation programmes into all sectors. We cannot continue to think of it as just an environmental issue.”

A century of meteorological data collected by the Samoa Meteorology Division supports the anecdotal evidence of the community. Temperatures have increased by 0.59 °C on average; annual precipitation has decreased by almost 50 millimetres; sea level at Apia has risen by 4.6 millimetres a year for the period 1993–2009.

What would projected climate change mean for Samoa? The Meteorology Division’s Climate Risk Profile warns of reduced overall annual rainfall, more high-intensity rainfall, higher average temperatures, and increased intensity of cyclones. And a projected sea-level rise of 36 centimetres by 2050 is a significant threat, given that 70 percent of Samoa’s population and infrastructure is in low-lying coastal areas. The Samoan community has critical concerns about the effects of climate change: fluctuating food production, impacts of drought and flooding on water quality and availability, more vector-borne and water-borne diseases, higher risk of forest fires, damage to low-lying infrastructure, and land loss. Impacts on energy supplies and tourism are further concerns.

Following three years of community consultation, the Government of Samoa addressed those concerns by formulating a National Adaptation Programme of Action. The NAPA, as it is known, sets out a coordinated countrywide response to these climate-change risks. The community consultations identified nine priority projects, including CLEWS, a climate early warning system. CLEWS is designed to help the country respond quickly and effectively to adverse climate events and, in the longer term, to adapt to changes in the climate, particularly where they affect agriculture and health.

The system is being implemented in three stages:

NIWA climate scientist Alan Porteous says the impetus for the early warning system has come from the Samoan people. “The MNRE took the opportunity to consult widely across the country, and then secured enough funding to provide enduring outcomes for Samoa.

“The current part of the project is focused on agriculture and health outcomes, but eventually CLEWS will be extended to provide information for other sectors of the Samoan economy. The system will help keep track of current climate developments, support seasonal forecasts, and help improve analyses of climate trends and risk factors. This information will be vital to help the Samoan community respond to climate change impacts.”

Anne Rasmussen says information from the CLEWS will provide a baseline of climate services and a pool of meteorological information that can be used as part of the government’s planning tools.

“We want to see climate change adaptation become a mainstream part of every sector’s long-term planning. For example, the Farmers’ Association will be able to provide detailed information to its members about crop suitability and risks to their crops from drought or heavy rainfall. Long term, we will be able to determine which crops will grow best in which areas. We have already been able to map 50 crops according to their soil suitability as part of this project. This kind of information will help communities enormously.

“In public health we know anecdotally that diarrhoeal diseases increase after heavy rainfall. The early warning system will help us work out which areas would be most affected, and when, and that helps us plan better health support. We hope other sectors, including tourism and fishing, will see the results of the tailor-made products CLEWS can produce and be interested too.”

Samoa has been commended by the United Nations Global Environmental Facility for its leadership in planning for climate change. Steve Brown is the GEF Advisor to the Samoan Government on UNDP-funded projects. Of the NAPA project, Dr Brown says, “It’s setting a benchmark for all sectors in Samoa, and the government plans to share these climate change adaptation lessons nationally, regionally, and even globally. Without this project, and CLEWS in particular, there’s no way Samoans can adapt this easily and well in advance. Savings will be immeasurable.”

The last word goes to Anne Rasmussen. “I guess we are taking the lead to some extent because we already have good policies and strategies in place. But it is also about focus, commitment, and prioritising. Our government sees climate change adaptation as a priority, a necessity for Samoa’s future, and now our communities do too.”

The project is funded by the Global Environmental Facility (GEF) and administered by the United Nations Development Programme (UNDP). NIWA is collaborating with MNRE to develop and install CLEWS. Other collaborators are the Japanese International Cooperation Agency, and the Australian Bureau of Meteorology. 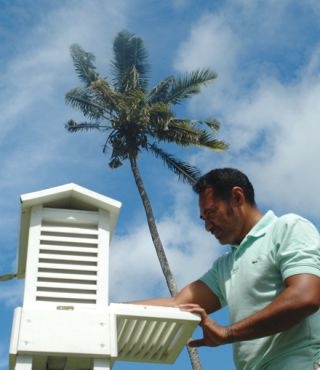