What grows up must fall down: the potential impact of climate change on plankton and carbon export

A small but significant proportion of carbon from the atmosphere is lost when organic particles sink to the ocean floor. How might climate change affect this process?

The ocean covers 70% of the earth’s surface and stores a huge quantity of atmospheric carbon dioxide (CO2), especially at southern latitudes. As discussed in the previous article in this issue (see pages 26–27), the sea surface acts as a bottleneck for the transfer of CO2 and other gases into the ocean. But once there, how does CO2 leave the surface waters so that it stays out of contact with the atmosphere for a long time?

Dissolved CO2 is removed from the surface ocean in two main ways.

The biological pump, where a small, but significant, proportion of the organic carbon formed by marine plants is exported to the abyss, where it remains out of circulation for centuries to millennia.

The organic particles in the surface ocean consist of a wide range of biological materials, such as plant parts and animal wastes. Often many particles stick together to make flakes several centimetres across. These large composite particles can sink rapidly through the water, falling hundreds of metres each day. Settling particles – called “marine snow” – take 20–30 days to reach the ocean floor 2–3 km down. As they sink, they are broken down by animals and bacteria in the cold, dark waters of the deep ocean. In addition, they provide food for animals at the bottom of the sea (e.g., worms, crabs, starfish). Less than 1% of the carbon fixed during photosynthesis in surface waters is buried in deep ocean sediments.

At NIWA, we are estimating quantities of marine snow sinking to the deep ocean by mooring sediment traps 1–2 km below the ocean surface. These traps operate something like rain gauges in that they collect the settling material in sample cups. Maintaining moorings for up to 12 months enables us to build up an annual picture of how well the biological pump is working.

Because the amount of marine snow depends on the growth of marine plants in the upper ocean, we also need a record of what is happening at the ocean surface. Therefore, instruments placed in sunlit waters, 30–40 m below the ocean surface, measure how much living plant material is in the water and also the rate of primary production (see Graph 1, below). 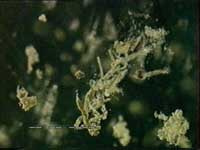 A rain of "marine snow". Each solid dash on the scale bar represents approximately 1 mm.

We already know that the strength of the biological pump has varied during past fluctuations in climate (see pages 18–19, this issue). But how might the pump, and hence atmospheric CO2 levels, alter in response to future global climate change? We can assess this by using what we know about production and carbon loss in Subtropical and Subantarctic waters in computer models that can help predict how the ocean and marine ecosystems might change (see pages 10–11, this issue).

Global model runs by French scientists suggest that the oceans around New Zealand will warm by approximately 2°C by 2050 when atmospheric CO2 levels might be twice those of today (assuming a 1% increase each year – see The crystal ball, this issue). The upper part of the ocean may therefore become more isolated from deeper waters, or stratified, because of vertical differences in temperature and salinity. Such physical changes may affect both the physical and biological CO2 pumps by:

Around New Zealand, the model results suggest a 5% reduction in the amount of material sinking out of surface waters to the deep ocean via the biological pump. Possible flow-on effects to other parts of the marine food web are still unknown.

For the New Zealand region the Inter-governmental Panel on Climate Change (IPCC) predicts that under future global warming scenarios westerly winds will increase. As a result, droughts would increase on the east coast and rainfall and floods would increase on the west coast (see pages 10–11, this issue). Both situations would impact local coastal marine ecosystems differently by modifying freshwater and nutrient inputs to the contin-ental shelf. The intensity and frequency of El Niño and La Niña events and tropical cyclones may also be altered. Previous work on the continental shelf of north-east New Zealand, suggests that easterly wind conditions associated with La Niña cause a reduction in nutrient supply, and an associated decrease in primary production, due to the shutting down of upwelling along the north-east coast of New Zealand (see Water & Atmosphere 8(2): 15–18).

Finally, future global climate change is likely to lead to changes in basic biological processes, such as water and nutrient cycling, plant productivity and species interactions. It is extremely difficult to make accurate predictions about particular regional effects: the interactions within marine food webs are too complex, and levels of uncertainty about how marine biological communities might respond are too high. However, global models suggest that with a warming climate, surface production around New Zealand might remain close to present levels, although the strength and efficiency of the physical and biological pumps in removing atmospheric CO2 from the surface to the deep ocean may be reduced.

Data collected by NIWA are helping to lessen the uncertainties in predicting how these oceanic pumps might alter in the future.

Scott Nodder is based at NIWA in Wellington; Philip Boyd is at NIWA in Dunedin. 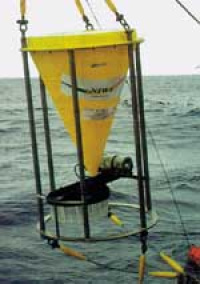 A sediment trap being deployed. 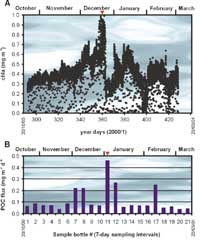 Graph1: Data from a mooring in Subantarctic water from October 2000 to March 2001.
A. Plant life at 40 m depth (as chlorophyll a concentrations).
B. Amount of carbon in sinking particles from a sediment trap moored at 1500-m water depth.
Note the delay of ~20 days between high productivity at the surface and in the deep ocean (red arrows) due to the sinking time of particles. 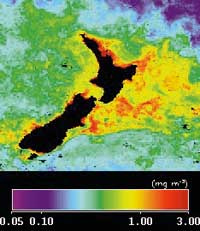