The New Zealand Biodiversity Strategy promotes the protection of ‘representative’ freshwater habitats. John Leathwick and Kathryn Julian discuss some tools for selecting those representatives, and where priorities for protection appear to lie. 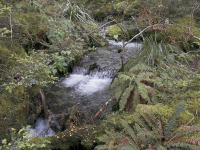 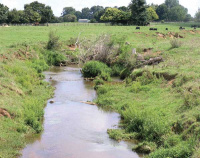 Levels of protection provided to different classes of river and streams in the Waikato Region.

This series of maps of the west coast of the Waikato Region is produced by software that identifies the set of sub-catchment planning units that gives the highest biodiversity returns at the least cost.

When New Zealand’s biodiversity strategy was launched in 2001, it clearly identified our need to “progressively protect priority representative freshwater habitats”. One of the challenges of implementing this policy is to identify which ecosystems and habitats have the highest priorities for protection. The concept of ‘representativeness’ dictates that we select areas that collectively provide protection for the full range of our river ecosystems. This means our protected sites should include not only high-country rivers and streams that are already protected, for example, in our national parks, but also lowland and coastal streams and rivers that support quite different sets of species to those found at higher elevations.

These questions are complicated by the network nature of rivers: protecting a river habitat requires not only managing the site itself (such as eliminating discharges and reinstating riparian vegetation), it may also require management of the upstream catchment to prevent activities that might negatively affect the protected site. Alternatively, protection might require reinstating access for migratory fish, for example by modifying or removing culverts that bar whitebait from moving upstream.

The tools at hand

At NIWA, we have been exploring how to select representative sets of sites for protection as part of work funded by the Department of Conservation. Our research has been made possible by the development of the River Environments Classification system (REC), a national database that represents New Zealand’s entire river network. Information stored in the REC describes both the conditions at each river segment (river flow, temperature, shading from riparian vegetation, distance from the coast) and the nature of its upstream catchment (upstream elevation, slope, land use, rock type). The REC has been used to classify all of New Zealand’s rivers and streams into groups that have similar characteristics, such as low-gradient lowland rivers and streams, lowland hill-country streams, mid-elevation rivers and streams, rivers with strong glacial influence, montane rivers and streams, etc.

This classification makes the task of identifying a representative set of river and stream catchments much easier. In particular, it means that we can systematically identify not only those types of rivers and streams that are not formally protected, but also where the best examples of those habitats can be found. For example, an analysis of rivers and streams in the Waikato Region indicates marked differences in the protection accorded to the seven most widespread habitat classes. Four middle-to-high elevation classes have very high levels of protection, reflecting the general bias of New Zealand’s protected areas towards higher-elevation sites. An extensive group of low-elevation hill-country streams is also well protected, with 24% of its length protected. Low-gradient rivers and streams have the least protection: although they comprise more than a quarter of rivers and streams in the Waikato, only 2.7% of their total length is currently protected. Low-gradient peaty streams are better represented in reserves, with 16.6% protection.

Identifying the particular catchments or subcatchments that would add the most value to our current set of protected sites is a more challenging task. One approach is to use selection software that identifies optimal sets of sites for protection. This software takes account of the river and stream habitats occurring in each catchment, along with information about the likely condition of each river segment and its upstream catchment. Using this approach, we can quickly identify a set of catchments or subcatchments that would maximise biodiversity protection, assuming for example that all sites are in pristine condition (map A). When we add settings that recognise the network nature of river systems, this encourages the software to select interconnected sub-catchments (map B). We can also identify how this set of priority sites would change once the effects of human impacts are taken into account (map C). Finally, we can identify those river and stream segments that would provide maximum value in extending currently protected areas (map D).

The case for urgency

Vulnerability is another important aspect to consider: the most urgent priorities for protection are those rivers and streams that are not only poorly represented in reserves, but are also under imminent threat of degradation from human activity. Combining these concepts of representativeness and vulnerability for New Zealand’s river network clearly identifies our lowland rivers and streams as most in need of action. Many of these habitat types are poorly represented in our protected area network, as well as being highly vulnerable to ongoing degradation. Many of these lowland habitats and their species are under threat from widespread intensification of agriculture, which results in higher inputs of nutrients and sediments into our waterways, coupled with the effects of irrigation and power generation on lowland river flows.

Tools such as REC and our selection software can provide much of the background information required to identify priority sites for protection. These tools could be further improved. Other NIWA research programmes are working to provide guidelines for restoring freshwater ecosystems and preventing invasion by alien species. However, apart from these technical questions, the main challenge facing managers in both central and regional government is how best to incorporate scientific findings such as these into real actions leading to better protection of lowland aquatic habitats.

Biggest bang for the buck

Dr John Leathwick and Kathryn Julian are ecosystem modellers based at NIWA in Hamilton.