In December, Dr Markus Rex from the Alfred Wegener Institute in Potsdam, Germany, visited NIWA in Lauder for two weeks. He was there to work with Greg Bodeker, Petra Huck, and Stefanie Kremser on a new method for incorporating polar stratospheric chemistry into global climate models. While the importance of including stratospheric chemistry in these models has long been recognised, the computational cost of doing so has been prohibitively high. As a result, projections of changes in surface climate in the Intergovernmental Panel on Climate Change (IPCC) Fourth Assessment Report showed large differences between models, particularly at high latitudes, depending on how the future evolution of ozone was treated in the models. Markus and the NIWA team hope that the new polar stratospheric chemistry scheme that they are developing, once incorporated into the IPCC global climate models, will lead to improved projections of climate change, especially in Antarctica. This chemistry scheme is also being used in a Marsden-funded project to extend a simple climate model to allow fast projections of Antarctic ozone recovery.

Andrew Thurber with a drawing (left) of a new spionid polychaete, a kind of worm that builds its tubes from sand and other small particles, and the new yeti crab. (Photo: Kareen Schnabel)

Two international experts have been working with the NIWA Invertebrate Collection (NIC) in Wellington to identify specimens collected on recent voyages.

Dr Marc Eléaume from the Muséum national d’Histoire naturelle in Paris spent a week in January mining our crinoid (sea lilies) collection. His main focus was identifiying and sub-sampling crinoids from voyages in 2007 and 2008 to the Chatham Rise, Challenger Plateau, Ross Sea, and Macquarie Ridge seamounts. These samples will contribute to Marc’s global study of non-stalked crinoids; he identified at least one undescribed species among the specimens. He also examined the stalked crinoids that formed the ‘meadows’ observed on the IPY voyage along the subantarctic Admiralty seamount. They most likely represent a new species in the family Hyocrinidae.

During his visit, Marc worked with Owen Anderson (NIWA) on improving his identificatin skills of this invertebrate group, regularly collected on NIWA voyages. Funding for Marc’s visit was provided through the Oceans 20/20 and IPY-CAML projects and the NIC.

For three weeks in January and February, Dr Andrew Thurber from the Scripps Institution of Oceanography, San Diego, focused on specimens in the NIC associated with carbon seeps. Andrew returned to NIWA after participating in two voyages in 2006 and 2007 to the cold seeps off the Hikurangi Margin east of New Zealand. Three unique marine worms were collected that belong to three new species in three new genera. Andrew is formally describing these species in collaboration with NIWA scientist Geoff Read.

Andrew also brought with him two examples of a second species of the yeti crab, collected on cold seeps off western Costa Rica. The first yeti crab, a single specimen of Kiwa hirsuta, was collected on hot vents south of the Easter Islands and was sufficiently unique to warrant establishment of its own family. Hence, Andrew’s two specimens of the new species increase the number of collected specimens of this family worldwide by 200%. Andrew is describing this new species in collaboration with Kareen Schnabel (NIWA). Funding for Andrew has been provided through Census of Marine Life’s Chemosynthitic Ecosystem Science (ChEss) Training Awards for New Investigators (TAWNI). 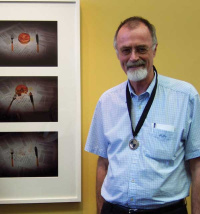 Wearing his medal, Graham stands beside ‘ηπ (eta pi)’, a tribute both to his work on modelling of endemic illnesses and to his well-known fondness for puns. (Photo: Robyn McBride)

As announced at the AGM of the New Zealand Freshwater Sciences Society in November, Graham McBride has been awarded the Society’s medal. The citation for the honour notes “his sustained and distinguished contributions over 30 years to pollutant transport modelling, statistical analysis and design of water quality monitoring networks, and human health issues related to waterborne pathogens.” Graham is recognised internationally as a specialist in the philosophy and procedures of water quality management, and has been a tireless teacher and statistical advisor to generations of New Zealand water quality scientists.

NZFSS President Kevin Collier presented the medal to Graham at the end of February at the launch of ‘Inspired Minds: Curiosity and Imagination in Science’, a photographic exhibition celebrating the work of the Principal Scientists at NIWA in Hamilton.