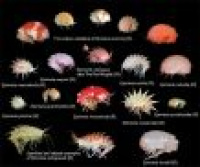 Biologists who go to sea inevitably collect sample after sample from the water and the seabed. The many nets full of mud we empty on deck during our expeditions in New Zealand and Antarctic waters often contain beautifully coloured amphipods.

Amphipods are a group of small crustaceans that inhabit diverse environments. They occur in all aquatic habitats, in all ocean depths, in freshwater and groundwater, in caves and in sea ice. Their feeding strategies are various: detrital feeders, herbivores, predators, scavengers, and suspension feeders. Some dine on plankton in the open ocean, some on algae on the beach, and yet others on the skin of whales. Some live in burrows, some live on trees, and many live in association with other invertebrates. Over 8000 species of amphipods are known worldwide.

Members of the families Epimeriidae and Iphimediidae are among the prettiest of these creatures and we find them frequently in Antarctic and New Zealand waters. To understand where these animals originated and how they have spread, we’re comparing the morphology (body shape) and DNA of specimens collected from the Ross Sea, the Weddell Sea, and the waters around New Zealand.

These living gems are predominantly red. The colour seems obvious to us, but fades quickly with increasing depth. Some species, such as Epimeria inermis, occur in several colours. Another recently described species, Epimeria schiaparelli, comes in two different patterns: striped and speckled. Our DNA analysis proved that both forms are the same species.

Most of these creatures are 2–4 cm long. Many specimens are covered with extravagantly long spines. We can only speculate on the role of these spines, since we know so little about the creatures’ biology. A spiny exterior may offer protection from predators by breaking up the body outline and making the animal harder to see, or by rendering it unpleasant to eat. Echiniphimedia hodgsoni lives in sponges, and its many small white spines camouflage it within the sponge tissue.

Feeding habits and mouths to match

The only feeding type not represented by members of these families is herbivory: these amphipods live deeper than algae, so feeding on plants is not an option.

A close look at the mandibles (mouthparts) of some species underscores their specialised food preferences. Gnathiphimedia mandibularis, which feeds on bryozoan colonies, has hammer-like mandibles (non-cutting) to crush the bryozoans’ calcareous (calcium carbonate) exterior. The mandibles of Echiniphimedia hodgsoni, however, have sharp cutting edges for biting through tough sponge tissue.

Epimeriidae and Iphimediidae show a great variation in their ability to move around, from sedentary (Epimeria georgiana, Epimeria rubrieques) to highly mobile (Epimeriella walkeri). Their degree of mobility is closely related to their food preferences, with the less mobile species more likely to be suspension feeders and the more agile more inclined to be predators.

The diversity of microhabitats and of potential foods combined with the different mobility patterns most likely encouraged the spread and speciation of Southern Ocean amphipods. When we compared populations from New Zealand and Antarctic waters by analysing their DNA, very similar-looking specimens from the Weddell Sea and the Ross Sea turned out to be different species. Through further studies of the morphological and DNA relationships between New Zealand and Antarctic specimens we’re trying to find out where they originated.

Dr Anne-Nina Lörz is a specialist in marine biodiversity, based at NIWA in Wellington. Dr Charles Oliver Coleman, a specialist in amphipods and crustacea from the Museum für Naturkunde in Berlin, came to NIWA in 2008 as a visiting scientist and helped NIWA staff identify specimens for NIC, the NIWA Invertebrate Collection.